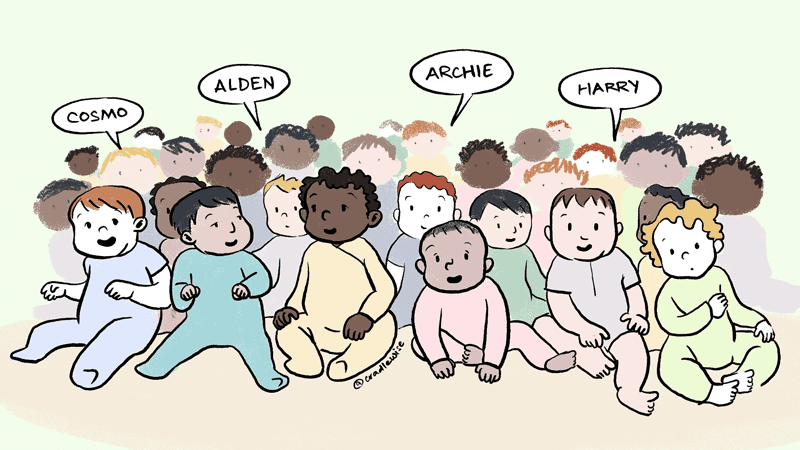 Are you expecting a baby boy in 2023 and on the hunt for the perfect baby boy name? Look no further! We’ve rounded up a list of the top baby boy names that are sure to be trending in 2023. From classic and timeless names to names inspired by your favorite musicians and fantasy shows, there’s something for everyone on our list of boy names that are about to be big.

Get ready to welcome the newest addition to your family with one of these meaningful boy names:

Meaning: Ruler of the household

Harry has been a popular name for decades, and it’s easy to see why. It’s strong and classic, yet it still has a mischievous edge to it. Plus, it’s the name of one of the most beloved royals in recent history, Prince Harry. And our beloved wizard of Hogwarts.

Recently popularized by Irish actor Cillian Murphy, this name is a great choice if you want to honor your Irish heritage.

Meaning: “Victory of the people”

Colin Bridgerton, a character on the popular Netflix series Bridgerton, has helped to boost the popularity of the name Colin. It’s a strong, classic name that has a regal feel to it. Plus, with its meaning of “victory of the people,”  it’s a great choice if you want your son to grow up to be a leader.

Meaning:  “From the town by the dunes”

Do you feel at home and at peace surrounded by water near the coast? Try this name for your baby boy to honor their connection to beaches.

This name also has Norse origins, where it means “bear god” and is often a shorthand version of names such as Oswald, Osmand, and Ozias.

With a mythical, magical vibe, what’s better than this name, especially if you’re a fan of fantasy and mythology?

Meaning:  “To be strong, healthy”

If you’re a fan of the dragon-taming Valyrians in Game of Thrones and its prequel, there’s no better name than ‘Valerian’ for your baby boy.

Meaning:  “God is my helper”

Lazarus is a perfect Biblical-themed name that signifies a new beginning, and reflects the resilience of people faced with challenges.

Did you know?
As a last name, Lazarus is most identified with poet Emma Lazarus, whose words are displayed on the Statue of Liberty.

As a last name, Lazarus is most identified with poet Emma Lazarus, whose words are displayed on the Statue of Liberty.

In Greek mythology, Atlas was the name of the mythical Titan who bore the weight of the world on his shoulders. The name signifies a godly strength and sense of responsibility.

Meaning:  “Blessed with happiness or felicity”

A popular name that dates back to the first century b.c. and is associated with good luck, Felix is a perfect name for a happy little baby boy.

What better name for a baby boy that literally means a harbinger of wealth and prosperity?

A highly popular name in Scandinavian countries, Bjorn is associated with wilderness and strength.

Meaning:  “of the forest; or prayed for”

Silas is often said to be derived from “Silvanus,” who was the Roman god of the countryside. If you’re looking for a baby boy name inspired by woodlands and the uncultivated beauty of nature, Silas is a perfect choice.

Is your baby boy making their debut in this world in July or August? Name them for the astrological star sign ruled by the Sun and inspired by royalty.

Meaning:  “A friendly and approachable human being”

Ryatt is a newcomer on most people’s baby name lists, a fun and invented name that we got from combining the names Ryan and Wyatt.

This name’s popularity continues to grow in the United States, especially after actor Joaquin Phoenix redefined the character of the Joker in the popular film franchise (watch for a new Joker movie coming in 2024).

This name is perfect for your baby boy if you’re looking for something old-school yet modern, that exudes timeless sophistication.

A name with a warm, friendly feel to it and a bit of a vintage, timeless vibe, Alden is a great choice if you want your son to have a name that embodies wisdom and kindness.

It has a classic, timeless feel to it and a youthful energy. Plus, with its meaning of “genuine” and “bold,” it’s great for your baby boy, who’ll grow up to be authentic and confident, just like his name’s meaning.

With its cool, modern sound, and cosmic, otherworldly associations, this name embodies balance and cosmological harmony.

Lately popularized by actor Noah Centineo and singer Noah Cyrus, this classic name has been consistently popular for centuries. It’s a great choice if you want your little one to have a name that embodies calm and tranquility.

It has a bold, confident feel and a bit of a mythological, heroic vibe. Plus, its meaning embodies strength and bravery.

Meaning:  “From the Caspian Sea”

With its coastal, adventurous sound, this name is perfect for babies who have a connection to the coast.

Check out our list of girl-baby names that’ll be popular in 2023.