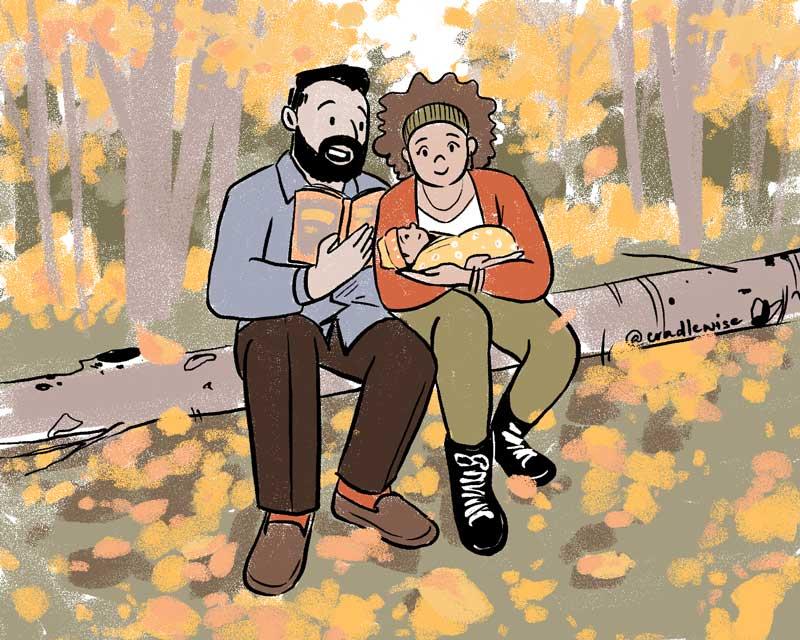 Choosing a baby name can be a challenge! That’s why we love meaningful monikers inspired by something personal, like the season in which your little one was born.

And we couldn’t pick a more idyllic season to inspire your baby’s name than fall! Here are 20 fall names for babies that will capture the color, wonder and festivity of the autumn season.

We’ll start the list with a stand-by favorite for a fall-inspired baby name: Autumn! Not only is it totally gorgeous, but it will also give you flashbacks to the beautiful season in which your baby was born every time you use it.

Did you know?
While “fall” and “autumn” are interchangeable when naming the season, historians say autumn was likely the original name, first appearing in the 1300s, while the word “fall” first appearing around the 1500s in reference to leaves falling off trees. An even earlier name for the season is harvest!)

When it comes to fall names for your little one, you can’t go wrong with a tree- or nature-inspired name. And what could be more perfect for fall than golden leaves falling from a hazel tree?

Is your little one due between September 22nd and October 23rd? Take a cue from astrology for this baby name. Inspired by the goddess of justice, Libra is often pictured holding a pair of scales.

For babies born any time in October, Octavia is a beautiful Latin-inspired baby name that calls to mind the eighth month of the year. (Not due in October? Shh, we won’t tell!)

Meaning: The golden one

This baby name idea is perfect for your golden princess–and it certainly suits a season marked by golden leaves and golden fields.

It wouldn’t feel like fall without buckets of marigolds on virtually every porch. Keep the feel of autumnal blooms going with this flower-themed name for a fall baby girl. (Plus, how cute is the nickname Goldie?) Marigold is also perfect for anyone drawn to the trend of botanically-themed baby names.

Meaning: One who dwells by a pear tree

Traditionally, Perry was a name to denote someone who lived near a pear tree or orchard. And because pears are harvested in the autumn, it also makes for a perfect fall-inspired name.

Meaning: Thought to derive from the Arabic siklāt (“red”)

Red is another of our favorite colors of the fall season―making Scarlett a beautiful name for a little one born while red maple leaves are falling outside. We love this name option as an alternative to super-popular Charlotte or Sienna.

Another tree-inspired name perfect for a fall baby is Aspen. (This also makes for a great choice for a family that skis!)

We love the baby name Blaze because it’s reminiscent of everything from fall campfires to candles flickering on cozy mantles. It’s the perfect way to capture the fire and energy of your own little spark.

Meaning: Of the woods

Why pick just one tree when you can name your baby for all of them? (Just be sure you’re prepared for a lot of “Forrest Gump” jokes from your friends.) Like Hazel and Aspen, Forrest also ties into the trend of tree names we’ve been seeing in the last couple of years (like Willow, Magnolia, Olive, and Oakley).

Or, skip the tree and focus just on our favorite part―the spectacular fall leaves! Even with the Scandinavian spelling, it will always be clear which season has your heart.

This baby name with English origin calls a forest full of red leaves and golden grass to mind. Plus, is there a better nickname than Rad?

If your baby is born sporting some red-haired genes, they would certainly be well-suited with this gender-neutral name meaning “little redhead.”

Bears certainly seem to be living their best lives in the fall, when they spend their days eating in preparation for winter’s long sleep. Capture the curious, strong nature of your favorite forest creature with this charming and quirky baby name.

Meaning: Row of houses by a wood

Is there anything cozier than the thought of a row of snug houses tucked by a forest? Inspired by just such a scene, Woodrow makes a bold and solid name for a baby boy born in autumn.

Meaning: One who hunts

If the fall hunting season is your jam (and even if you’re more of a Nintendo Duck Hunt kind of person), the name Hunter is certainly perfect for a baby born in the fall. Evoking a sense of wildness and power, Hunter also makes for a surprisingly gender-neutral name, as proven by Euphoria actress Hunter Schafer.

Meaning: Bowman, one who excels at archery

Or maybe you’d rather a name with a little more history to it? The English and French-inspired name Archer first became popular in the 1800s, but it fell out of vogue for nearly 130 years before its recent resurgence. And if your little one is born in November, their sign will be Sagittarius, whose symbol is an archer!

Meaning: Esoteric name of the Greek mythological daughter of Zeus by Demeter, the queen of the harvest

While she herself became Queen of the Underworld, Persephone’s Greek mythology also shares that she helped her mother, Demeter, Goddess of the Harvest, to control the seasons for plentiful harvests. In either case, it’s a beautiful name for a daughter.

Meaning:  “Dark red” or “crimson” in possible tribute to the creature’s alignment with purifying flames

The phoenix is a mythical bird associated with the sun, fire, and the ability to overcome all odds. We love Phoenix as a gender-neutral name that captures both the fall season’s color and fire (and the undeniable spirit your little one brings to the table).