How sleep can boost a baby’s immune system 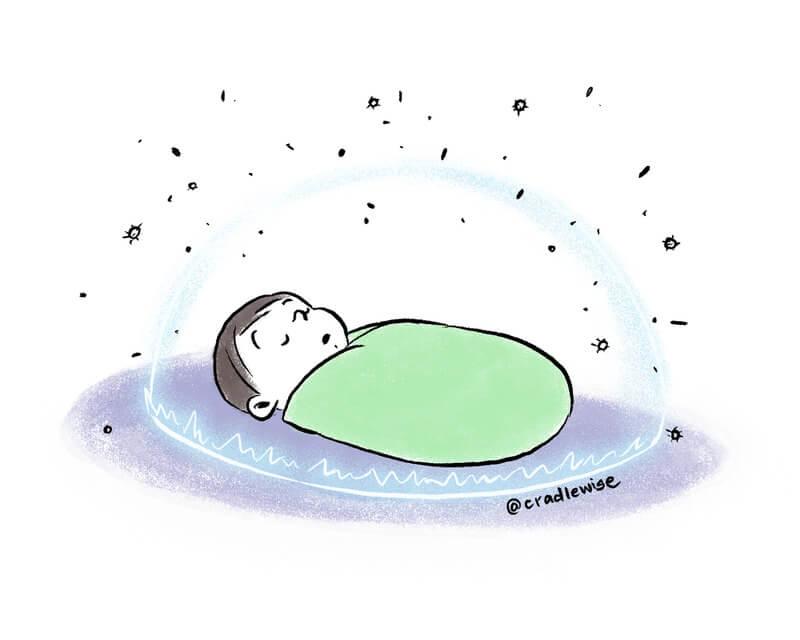 Sleep serves multiple purposes in the functioning of various biological processes, and your baby’s immune system is one of the most important ones. Processes like physical and mental growth, emotional and psychiatric health, building the immune system, clearing toxins from the brain fail due to lack of sleep. Sleep enhances the performance of these processes and is crucial to our general well-being.

Don’t you just hate it when a loved one feels unwell? It gets even worse when the loved one is a baby. You do everything within your power to reduce the risk of your loved one developing an illness.

Unfortunately, infants and children are likely to pick up bugs very quickly. Why does this happen? Why do our children feel unwell so often despite all the precautions we take? This is because your baby’s immune system is still developing.

While you cannot duck every little flu that comes along, you can help prevent and fight these problems by ensuring that your baby builds a good immune system.

What is the immune system?

The acquired adaptive immune response is the result of infections or vaccinations.

Innate immunity has a limited role. It identifies the threat and tries to remove it. For example, our tears contain microbicidal elements that fight against microbial eye infections.

If the innate system cannot fight the intruder independently, it mobilizes the acquired adaptive immune system.

Simply put, the immune system is a network of cells and proteins that defends the body against infection.

Think of your body as a fortress. The skin and mucous membranes are the walls of the fort (the first line of defense). They act as barriers to intrusion. However, if the walls are breached, parts of the innate immune system (the foot soldiers) repair the damaged portions and clear away the intruders.

If the intrusion is large, these foot soldiers send messages to the control room for help. The control room calls upon the acquired adaptive immune response. Depending on the type of intruder (virus, bacteria, fungus, or parasite), the control room will send out a specific unit to fight and defeat the intruder.

This is what the immune system is all about.

Why are pregnant women considered to be more at risk from infections? This is due to a quirk of nature that takes place deep in the body.

50% of the fetus’s genetic material comes from the father. The mother’s immune system should fight and reject the fetus like any other intruder. This is where the quirk gets into the act.

To ensure that the fetus is not rejected by the mother, her immune system generates a tolerant immune memory of the fetal tissue. This is known as the ‘paradox of pregnancy .’ The mother’s immune system develops tolerance to paternally derived fetal antigens despite having an adequate defense against infections.

This results in a scenario of immunosuppression in both the mother and fetus, which carries over into early life. Since the mother’s immune system is suppressed during this period, she is more susceptible to infections.

Baby’s immune system: Why is it weak at birth?

Our immune system comprises cells, tissues, organs, and proteins. While your baby’s immune system works in exactly the same manner as yours, it has limitations. Being young and immature, the system takes time to learn about the different adversaries and build an effective campaign against them.

The response to the first infection is neither as quick nor as strong. But, the system learns, and the next time the same bug enters, the system is ready to deal efficiently and effectively against it.

This unpreparedness of the immune system is why your baby is more prone to infections. As the baby grows, so does their immune system. The system soon recognizes the invaders and creates effective barriers to keep them away.

Proof of its effectiveness shows how we rarely suffer from chickenpox or measles more than once.

How does the mother’s immune system impact the baby’s immunity?

Studies show that vaginal childbirth provides additional immunity to the baby. Bacteria from the mother’s vagina passes on to the baby. This helps build the bacteria colony in the baby’s gut. Healthy gut bacteria contribute immensely to good immunity.

Post-birth, you still pass antibodies to your baby. Colostrum in breast milk is rich in antibodies that get passed on when you breastfeed your baby.

Babies do not have as strong an immune system as adults. The immunity passed on by you starts decreasing after the first few weeks after birth. Your baby’s immune system starts maturing around the 2nd or 3rd month.

Cell-mediated immunity (an immune response that does not involve antibodies) develops in these first few months.

How does sleep boost the immune system?

Our folks are not wrong when they ask us to get a good night’s sleep if we are feeling under the weather. We know that the immune system remembers their encounters. The immune system collects fragments from the intruder and creates memory cells.

There is one interesting factor that connects the immune system to sleep. A study found that sleep supports long-term memory formation. The adaptive branch of the immune system develops a memory of past infections.

So, after fighting the intruder, the majority of the fighters die. The few left, remember the type of intruder and the response required. These fighters multiply rapidly and fight the intruder effectively based on their memory in case of further contact.

Great! But how does sleep help?

Sleep is an essential modulator of the immune response. Thus, a lack of sleep can weaken immunity, increasing our susceptibility to infection.

In fact, a mere three hours without sleep are enough to reduce the function of critical immune cells.

How to boost your baby’s immune system naturally?

As a parent, you have provided your baby with a head start through your immunity system. But, what can you do to help till the baby’s immune system is fully developed?

Q: When does a baby build immunity?

A: Babies build immunity around the age of two to three months old. That’s when their immune system matures.

Q: How do babies build immunity?

A: Babies make their own antibodies that protect them now and also in the future. Each time they get infected with a virus or other germ, their immune system starts to work. Babies also get passive immunity from the antibodies produced in the mother’s body.

A: According to International Breastfeeding Journal, “It has been demonstrated that children who had been breastfed remain better protected against various infections, and notably respiratory tract infections, well beyond infancy.”

This happens because antibodies pass from the mother’s breast milk to her baby and strengthen their immune system.