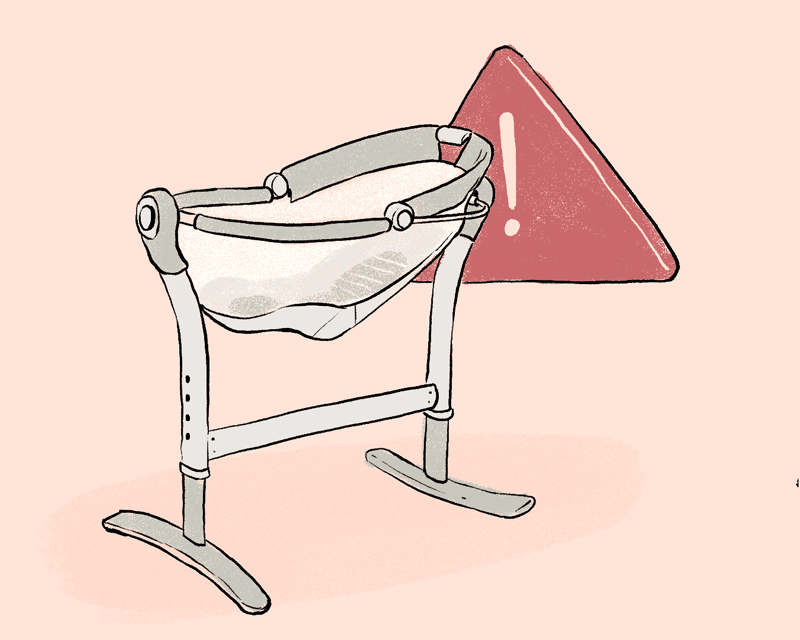 It can be confusing (if not daunting at times) to keep track of what’s considered safe or not for your baby as a new parent. Making matters more complicated is that products like crib bumpers are available for sale despite being linked to dozens of fatalities and hundreds of serious injuries. But that’s all about to change as lawmakers pull unsafe sleep products off the shelves.

In a statement, Dr. Moira Szilagyi, president of the American Academy of Pediatrics (AAP) referred to the new law as “a monumental victory for children’s health and is a culmination of decades of pediatrician advocacy.”

“Despite what the science shows, crib bumpers and inclined sleepers have remained on the market and store shelves, misleading parents into thinking they are safe and leading to dozens of preventable infant deaths,” Szilagy said. “No family should ever experience this tragedy… parents will have the long overdue peace of mind that these dangerous products can no longer find their way into their homes.”

Did you know?
In 2011, Chicago became the first city to ban the sale of crib bumpers.

In 2011, Chicago became the first city to ban the sale of crib bumpers.

What does this new law mean for parents?

Inclined sleepers for infants and crib bumpers will be considered banned, hazardous substances 180 days after this law is enacted. It will be illegal to make or sell these products beyond November 12, 2022, irrespective of the date of their manufacture.

Dr. Nilong Vyas (MD, Pediatrician), founder of Sleepless at NOLA, says “I think it is a valuable piece of legislation that will help many families navigate the often confusing products available to them in the newborn period. These products are an excellent place to start but more work needs to be done on other products to ensure the utmost safety for their children.”

Why are crib bumpers and inclined sleepers dangerous?

AAP specifically warns against using padded crib bumpers or inclined infant sleeper products, both of which increase the risk of suffocation for infants.

There’s no evidence that crib bumpers prevent injury for young babies. In fact, as your little one gets older and starts pulling up on their own, they could climb onto the bumpers, increasing the chances of getting injured.

Inclined sleepers also pose a safety hazard for your little one. They are also commonly referred to as baby pods, docks, loungers, or nests. These products allow infants to doze off at a 30-degree angle, but according to the Consumer Product Safety Commission (CPSC), infants should only be inclined to an angle of 10 degrees or less. That’s because babies may fall asleep in positions that restrict their airways, or roll out of the devices and become trapped underneath.

As per the U.S.Consumer Product Safety Commission, 113 fatal incidents have occurred associated with crib bumpers through March 2019. As for inclined sleepers, CPSC has recorded 73 infant deaths through June 2019.

According to AAP, your little one should sleep on their back on a firm, flat surface with a tight-fitting mattress and fitted sheet. Keep your baby’s crib/sleep space clear of loose blankets, stuffed toys, bumpers, and other soft items.

What kinds of products are banned?

The Safe Sleep for Babies Act does not include swings, bouncers or car seats, all of which have their own safety procedures to follow and are not marketed as safe sleeping options for infants.

Some of the most important drivers of this Act are real moms and a community of parents who suffered at the hands of unsafe baby products and don’t want any other parents to go through what they did.

One such mom is Erika Richter who lost her daughter Emma only when she was two weeks old. Emma was using a Fisher-Price Rock ‘n Play Sleeper, which is now banned under the new law.

“I’m still a mom. I’m still Emma’s mom. I still have that responsibility, and I still think like a mom and I still want to protect other moms and other children,” she said. “That is so important to me,” Erika told ABC.

Back in 2019, Fisher-Price recalled 4.7 million Rock ‘n Play Sleepers after CPSC linked around 30 infant deaths to the product.

As per CPSC, back in 2019, approximately 694,000 units of all models of Kids II Rocking Sleepers were also recalled after reports of infant deaths in them.

The present Safe Sleep Act was also supported and spearheaded by many such parents, pediatricians, and consumer advocates before it reached President Biden.

What if my baby is already using one of the banned products?

According to Dr. Vyas, “They should stop using them at once. It is best to discard them and not to hand them down to others.”

While it is important to make sure that you and your baby are getting adequate sleep, it is also important that it is done safely. We understand how overwhelming this legislature could feel, especially if your baby was sleeping well using any of the banned products.

However, it’s also equally important to keep in mind that the standards set by the U.S. Consumer Product Safety Commission (CPSC) ensure that your baby is sleeping in a safe environment.

Dr. Vyas further states, “The products that are being referenced in the article are often used improperly in the crib allowing a child to become entrapped in between the product and the crib slats causing suffocation. Additionally, the crib bumpers can have a similar effect as well as become untied and entangle an infant.”

How can I get my baby to sleep safely?

Cribs are regulated by the U.S. Consumer Product Safety Commission so remember—they are safe sleep spaces when used on their own without any of these dangerous add-ons.

Cradlewise is one such safe and effective solution to help your little one fall asleep. It creates a soothing environment using gentle motion in which your baby can continue to sleep if she or he is woken up. Cradlewise’s gentle bounce motion mimics how a parent would rock their child to sleep. (You can completely customize the bounce settings according to your preferences.)

Parents trust their babies with a number of baby products that are supposed to help them sleep and keep them safe. The Safe Sleep Act of 2021 makes baby product companies accountable for the products they are manufacturing. Banning products that have been linked with infant deaths is a positive step in the direction of keeping our little ones safe.

Learn more about safe sleep guidelines for your baby.

Product
How can you foster a secure attachment in your baby?
Product
11-month-old baby sleep guide
Product
Is it okay to put baby to sleep without burping?
Save up to $600