How to transition out of a swaddle without losing sleep 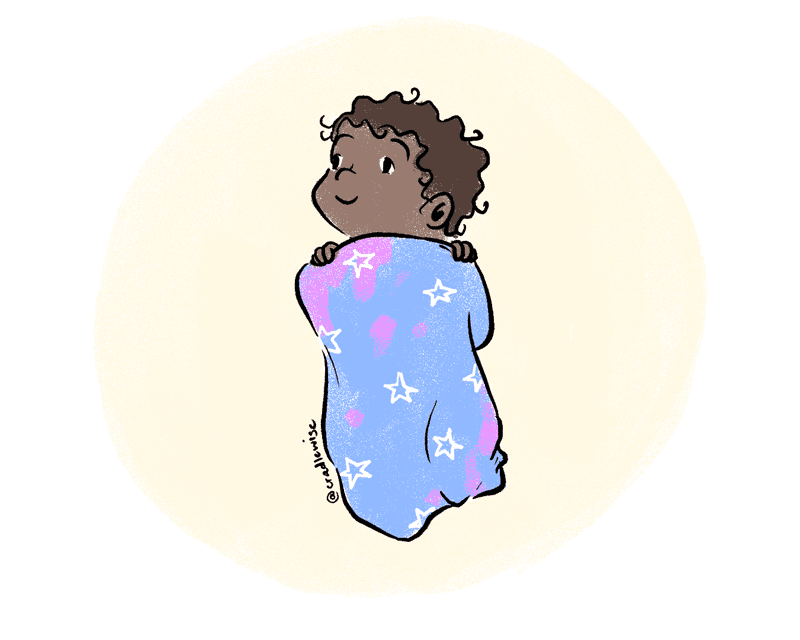 Who can ever get enough of watching their adorable baby sleep wrapped like a cute little burrito? But our little ones grow up so fast, and eventually, there comes a time when you will have to ditch the swaddle.

Although swaddling is effective for calming infants and helping them sleep better, it becomes a SIDS (Sudden Infant Death Syndrome) risk once they start to roll over onto their sides or tummy.

Transitioning your baby out of the swaddle can instill fear in new parents. Especially when your little one has slept better and longer while they were swaddled.

In addition to staying the course, there are a few things you can do to help your baby sleep better without their swaddle. We consulted Dr. Molly O’Shea, MD, founder of Birmingham Pediatrics, on when you should stop swaddling your baby and how to make the transition out of the swaddle.

When to stop swaddling my baby? 4 signs to look out for

Here are some surefire signs that your little one might be ready to go out of their cocoon. (You can start weaning your baby even if they exhibit only one of these signs.)

The American Academy of Pediatrics (AAP) recommends that parents should wean swaddling when infants show any signs of trying to roll over (which can happen as early as two to three months).

Dr. Shea says, “Often parents can see the early signs of rolling (rolling to the side, moving the arms across the body while bringing the legs up) and can begin loosening the swaddle at that point to ease the transition. Some babies take their parents by surprise and roll straight over out of the blue. Those babies will need to transition quickly.”

Every baby develops at their own unique page, but rolling can happen anywhere between two months to four months old on average.

The chances are that your baby might attempt to roll over while swaddled, which is a safety hazard. It increases the risk of suffocation since they cannot roll back to their backs by themselves with their hands wrapped.

Your baby will likely have increased motor skills as they grow, which can lead to a free arm, leg, or even their entire body breaking out of the swaddle. An undone or loose swaddle blanket in your baby’s crib becomes a hazard for safe sleep.

You can expect some resistance with all babies when you first start swaddling them. But while some babies prefer being tightly wrapped, others might like having the freedom to move as they grow and develop.

If your baby usually sleeps well at night but has suddenly exhibited signs of being angry or frustrated in their swaddle, this can be an indicator that it’s time to make the switch. You should also check for signs such as sweating or breathing rapidly, which could indicate overheating.

When they are born, all babies have something called startle reflex or Moro reflex. This is why they become easily startled and tend to cry or extend their arms and legs when exposed to any loud sounds or movements.

Did you know?
Swaddling your newborn mimics the cozy feeling of being safe in the mother’s womb, helping them feel secure and calm down. It also reduces the Moro reflex or the startle reflex in newborns and helps them sleep for extended periods.

This reduces gradually as they grow and develop, typically around the same time when they exhibit signs of rolling over (but can potentially extend to six months of age). If you notice your baby has little or no startle reflex, it is time to safely transition them out of the swaddle.

To make the transitions like these, such as transitioning out of a swaddle or going from bassinet to a crib easier, we have invented the Cradlewise smart crib, which mimics the sensations of the womb. The technology senses the earliest signs of wake-up through the live camera monitor and starts soothing infants back down to sleep by gently bouncing and playing soothing white noise tracks. This can help you transition without much resistance or fuss from your toddler.

How long do you swaddle a baby?

If you are wondering how long it might take your baby to adjust to sleeping outside the swaddle, there is no specific time frame that fits all babies.

According to Dr. O’Shea, “Some babies adjust to swaddling straight away while others take a few nights to adjust. Like going to a hotel on vacation and sleeping in a bed with different pillows or mattresses, sleeping without swaddling can take some adjustment time. Having confidence that your baby can make the move is the key to success”.

Depending on your baby, it might take a few days to a week (or even three weeks in some cases).

Also, keep in mind that many babies need to fuss or cry for a short time for a few nights to get themselves settled to sleep as they adjust to being unswaddled. “Fussing and crying is normal, and although it can be distressing for parents to hear, babies need to figure out how to put themselves to sleep in order to develop healthy sleep habits,” Dr. O’Shea says.

This is a popular method used by parents to slowly transition their babies out of the swaddle. This method also works best when your baby shows signs of rolling over but still has the Moro reflex.

Leave the dominant arm of the baby out of the swaddle. Having the other wrapped helps manage the Moro reflex in babies.

Once your baby has gotten used to sleeping with one hand out, you can go ahead with leaving both arms out of the swaddle. This helps your baby sleep with their arms free but still provides comfort since the swaddle is on their chest.

You can transition your baby out of the swaddle by swaddling them for sleep at night and ditching them during day naps.

This will help your tot get used to sleeping without the swaddle and enjoy the freedom and the comfortable snug wrap at night.

You can also pull the band-aid off by putting your baby to sleep without the swaddle instead of slowly transitioning them. This method might work for babies who are already rolling over since they need to be transitioned faster.

Babies who might still have some startle reflex might find it difficult to adjust to this method. In that case, you might want to rethink trying out other ways to slowly get your baby used to sleeping without the swaddle.

Here are some ways to help your baby calm down without a swaddle (which can also be helpful for babies who never quite “took” to swaddling in the first place).

You can still make your baby feel warm and secure by using a sleep sack or a wearable blanket.

Make sure you use a light, breathable option and maintain the optimal room temperature for your baby to drift off to dreamland easily.

Another important tip is that you establish a consistent bedtime routine. Following the same pattern, every evening helps to signal your baby’s body to unwind and get ready for sleep. Things like calming music, white noise, bedtime bath, reading a story, and black-out curtains are proven to calm babies down.

Studies have shown that pacifiers are effective in calming babies down before bedtime.

A mother’s touch is very calming and reassuring for babies. Have a mini massage session with your baby before bedtime to help them feel safe and secure before going down to bed.

It is important to watch out for signs of rolling over in your baby to determine when to start weaning the swaddle.

However, if your baby does not stop crying and hasn’t shown signs of trying to roll over, it might be too soon to stop swaddling. You can go back to swaddling your little one and then try transitioning after two weeks.

Q: How do you know when the baby is finished swaddling?

Q: Can you swaddle with arms out?

A: Yes, it’s perfectly safe to swaddle your little one with both or one of their arms out. Just make sure you wrap their blanket safely.

Q: Do you have to swaddle a newborn?

A: It’s not necessary to swaddle a newborn if they are comfortable and happy without being swaddled.

Q: How many swaddles do I need?

A: Technically, you need two swaddled. However, if you frequently do laundry, you will need more than two.