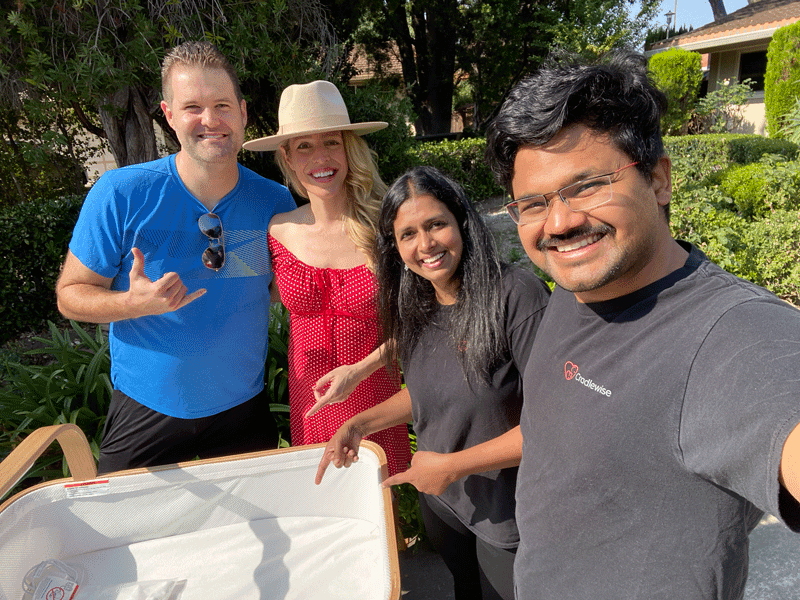 Over the past two years, the ever-changing chaos of the global pandemic has tested our families in unprecedented ways. All the pregnant mamas and papas have had it especially hard. Expecting parents find it more difficult than ever to get some extra helping hands. Despite the constraints, our community has found creative ways to use Cradlewise’s technology to stay connected through these trying times.

Pamela Marie Hobby (38) and TJ Hobby (39), first-time parents of Buster (four months) and early members of our family, share their postpartum experience. Their story of how they forged a bond between their son and families in Oklahoma despite living across the country in  Los Angeles is nothing short of inspiring.

We caught up with Pamela Hobby for a quick talk on her experience as a first-time mom and how she overcame some of the restrictions that COVID-19 has placed on us.

Self-described tech enthusiasts Pamela and TJ came across Cradlewise after a bit of digging on the internet. “I still remember some of the feed of just seeing the bounce. But aesthetically, I loved the minimalist look and feel. And out the gate, I was completely drawn to that.”

Shortly after discovering the crib, the couple signed up for a product demo. “I realized the tech capabilities could positively impact my life. It was unlike anything I’ve ever seen,” Pamela says.

Seeing other parents ask similar questions about the product to Radhika (the co-creator of the product) in real-time built their trust and sealed the deal for the couple. Pamela and TJ created a Cradlewise fund on their registry where loved ones could contribute toward the overall cost.

And that paved the way for them to open up about the crib to their close circle. “I would love to tell new parents to think about that because people start asking about it. What is this Cradlewise? And what does it do? And we were able to kind of go through everything from our research and then passionately sell it to our friends and family when we were already sold [ourselves].”

Welcoming their baby during a pandemic

Becoming a parent is earth-shatteringly transformative even in the best of circumstances. And given the current climate of the world, it can become even more complex to navigate this transition.

“It’s almost like you realize that people might not get to see you be a mother because of the distance and the protections that you have to take,” says Pamela.

Her hospital experience was different than she envisioned as well. When she went into labor, the hospital was at full capacity and didn’t have any beds. They went to another hospital out of their network and wore masks until toward the end of delivery.

Her parents had flown into California from Oklahoma but weren’t allowed inside. Pamela recalls, “And I kept asking the doctor if I could just wheel the baby down to the front door, and we will talk to each other through the window. But the doctors were like no.

After having been present at all of my nieces’ and nephews’ births, that was something that I hadn’t wrapped my mind around…we were just aching to be with each other in real space and real-time together.”

But once Pamela and TJ were discharged from the hospital, their parents finally met Buster for the first time.

They connected the grandparents’ phones to Buster’s smart crib through the caregiver team functionality on the app. “I would do like a wave even though they were here next even though they were right here next to the crib, and they were like yeah, I see that. For all of us, it was just beautiful to see that the tech was really working in the way we kind of imagined it would,” Pamela says.

After the grandparents had returned to Oklahoma, the distance started to set in. And both Pamela and TJ began to receive text messages from their respective parents nudging them to tell them when Buster was in his crib.

They noted all of the sweet details, looking for clues into their adorable grandbaby’s personality. Pamela’s mother said to her, “I woke up in the middle of the night and couldn’t go back to bed. But I just put Cradlewise on, and I could see his little legs moving. And I said, oh, he’s a mover!”

“And my mom would text me a photo and say, look at his little Huckleberry Finn outfit, and he had overalls on and like, no socks,” Pamela recalls.

Pamela and TJ began referring to ‘Granny Cam’ as a system to help their parents see Buster when he’s in the crib. They would take screenshots and show off their little pride and joy to their friends.

“Well, when the Bunco girls come over, the Bunco girls want to know what he’s doing. So we put it on the iPad, and we set it down and just watched him. You don’t realize that that’s like legacy building in these memories that are being created.”

They not only get to experience the joy of these little moments with their grandson but also watch their daughter step into her role as a mama.

“My mom would take little screenshots and say, ‘you did such a good job.’ And then she will say, ‘he’s asleep.’ I’ll wave, and she will see me smile in the camera, and those are sweet moments that we would have if we weren’t so far away,” Pamela says.

And the caretaker app isn’t just limited to grandmas and grandpas.

“It transcends time and space and some of the restrictions that COVID has put on us. It gives us that feel-good moment of connection; that we are all in this together through the tech.”

Mom, I get it now

In recounting her journey with Buster, Pamela also reflected on the deep, unconditional love that a parent has for their child, which she has now experienced firsthand.

“My parents are incredible, salt of the earth/angels on earth/would do anything kind of people. They taught me to be generous and kind. They’re always compassionate and want to lend a helping hand. They would do anything for my brother, sister, and me… not everyone has that. But I’m so grateful that that’s going to be a legacy that we can pass on,” Pamela says.

One of the most challenging chapters of her life is when she was diagnosed with leukemia at just two years old. She lived in and out of the hospital with her mom until she was five.

“I think about the years that she went through, and she documented literally all the things I was going through in a notebook. And then, on the back, she put my stickers. So when I did my blood work, she would keep these stickers,” Pamela shares. “I have four of these made, like steno notebooks just filled with her handwriting like even from day one.”

Her experience in overcoming the odds inspired her to give back by creating My Doctor’s Meds, which aims to bridge a gap in physician/clinician wellness programs and move the needle on burnout and depression rates in the medical community. “I thought I needed to do something with this because she documented how those medical professionals saved my life. She talks about the nurse coach playing Go Fish with me and a provider. She’ll say they told me to go to the ER tonight.”

Pamela attributes her upbeat disposition and tenaciousness to her parents. “And now that I have peeked behind the curtain, you really understand their sacrifice and how dedicated they were to getting their child better, no matter the outcome. They were dedicated to that, and they stayed positive.”