Why do we sleep? The evolution of rest, according to science 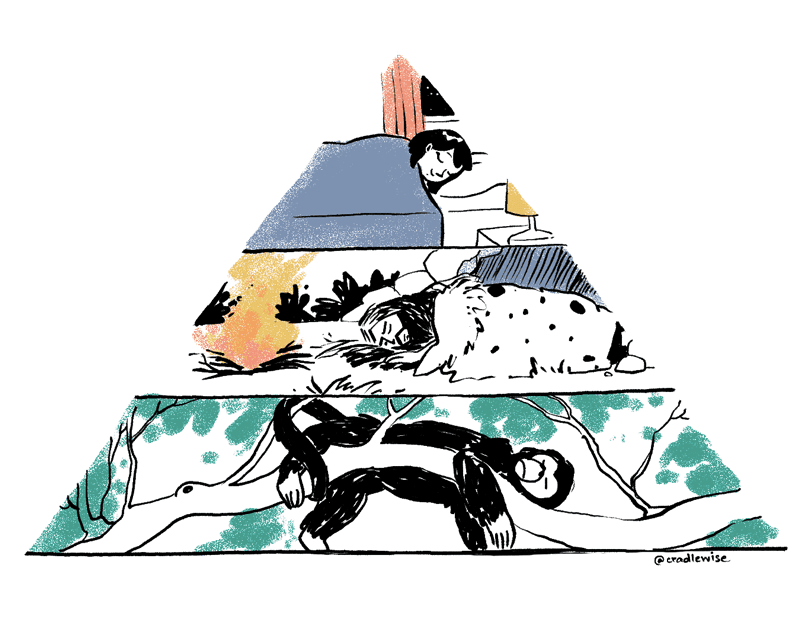 Some two million years ago, some of our hairy, tree-living ancestors descended from sleeping on the trees to sleeping on the ground. Fast-forward to the present day, their descendants have split the atom, walked on the moon, and sent probes on interstellar voyages. Not to mention, colonized the entire planet.

So what gave way to this evolution?

REM sleep is the answer. It’s this state of deep sleep in which we become as good as dead and dream of marvelous visions each night. This state conferred some unique benefits to our species. These benefits made some significant changes to our jumbo brains, and these changes are the very reason why we are at the top.

Let’s go back to the beginning to find out what happened.

Descent from the trees

We often like to think of our species as unique on this planet. We’re not, though. We belong to a group of Primates with over 200 species. Our first cousins (like the Neanderthals) might have gone extinct, but our second cousins — monkeys, lemurs, and apes are pretty much still around. Today, our closest living relatives are chimpanzees and bonobos, with whom we share 99% of our DNA.

Did you know?
Sleep, hunger, blood pressure, alertness, and pretty much everything else in your body happen in sync with the circadian rhythm.

Sleep, hunger, blood pressure, alertness, and pretty much everything else in your body happen in sync with the circadian rhythm.

Life of our closest cousins

So like our closest cousins, our ancestors also built nests on trees to sleep each night (a tedious task that took up hours of our ancestor’s time). But then, as our ancestors evolved to have erect bodies, they became unfit from living on trees. And that was when they moved to sleep on the ground. At this point, our shared histories with our cousins began to diverge.

The transition to sleeping on the ground, first and foremost, eliminated the most significant danger of sleeping on the trees—lethal falls. One bad dream, one wrong turn while sleeping, and you would have been out of the gene pool.

Second, it brought several physiological and cultural changes like beds, shelters, variation in chronotypes (how early or late someone sleeps), and controlled use of fire.

Controlled use of fire is probably one of the most important factors as it did two things. First, it saved us from flesh-eating and blood-sucking predators while we slept on the ground. Second, we began sleeping in large, sentineled groups on stable ground beds, protected by fire, which would have fostered a safe sense of community.

For the first time in history, there was no danger of falling off a tree. There was fire against predators and the safety brought by sleeping in groups where someone was always guarding.

For the first time in history, our ancestors experienced the advantage of deep, efficient sleep.

This advantage put them in a unique position.

Our ancestors could now capitalize on the benefits of deeper, more intense, REM-dominant sleep. And that’s where our journey of a different type of dreaming began.

Why do we dream?

Human sleep is unique. Compared to other primates, human sleep duration is the shortest, averaging seven hours. Our primate relatives clock in between 13 and 17 hours of sleep each night. Good for them, but our sleep is way more efficient.

Higher sleep efficiency means that human sleep is shorter, deeper, and exhibits a higher proportion of REM. We spend a staggering 25% of our sleep in REM, which means we dream more. The human REM to NREM ratio (22:78) is the highest proportion of REM to NREM of all primates.

But first, how did human sleep evolve to be more efficient?

Two evolutionary anthropologists, Charles Nunn and David Samson have done some groundbreaking research in this department. They have also postulated the Sleep Intensity Hypothesis to answer this question.

According to the Sleep Intensity Hypothesis, “early humans experienced selective pressure to fulfill sleep needs in the shortest time possible.”

This means that early humans were pressured to sleep more efficiently in less time because of several factors. For one, the risk of predators was higher in terrestrial environments. So the sooner they completed their quota of REM sleep, the better the chances of protection from incoming threats. For another, less sleep meant more time to pursue skills and knowledge. And deep sleep meant effective consolidation of these skills, which eventually led to higher cognitive intelligence, a point we’ll discuss later in more detail.

What’s going on inside your brain when you’re sleeping?

Research has revealed we have four 90-minute long sleep cycles. And these sleep cycles have three distinct stages of human sleep:

What happens in NREM sleep?

The N1 stage is the shortest (usually lasting less than 10 minutes) and occurs right after you drift into sleep.

The N2 stage begins slow-wave brain activity and lasts for around 30 to 60 minutes. Your body becomes more relaxed.

The last NREM stage is the N3 stage, which lasts between 20 and 40 minutes. It’s the hardest to wake someone up from this stage.

Each of these stages takes us into deeper depths of sleep. The body repairs and regrows tissue during this phase. It builds muscles and bones and boosts the immune system.

What happens in REM sleep?

On the other hand, REM sleep is associated with our bodies becoming paralyzed and our minds becoming more awake as we dream.

Recent MRI scan studies show that specific brain parts are up to 30% more active during REM sleep. There’s high neural activity, pretty much the same as when awake. Many things happen in REM sleep — like learning, consolidation of the information learned, and sieving essential details in long-term memory.

However, early humans evolved to dedicate more time to slow-wave sleep (N3) and REM sleep with terrestrial sleeping. Sleeping on the ground led to less time to light N2 sleep (NREM stages one and two). Less time in N2 sleep increased the total time we spent in deep sleep compared to light sleep.

From an evolutionary perspective, even though deep sleep stages were vulnerable, they shortened the total time early humans needed to sleep and be inactive.

If we consider the evolutionary advantages REM sleep bestowed upon humans, it would be safe to say that this shift worked out just fine. So if you’re wondering why we dream, it’s because dreaming gave our primitive brains some evolutionary gifts.

After we fall asleep, we enter the REM sleep stage. This stage conferred three unique benefits on us.

The first of which is called threat priming.

Through the ability to dream, REM enables sleepers to rehearse events or social scenarios that might occur in their waking environments. Our brain has this unique ability to imagine scenarios that haven’t even taken place yet, in exceptional detail. In a way, daydreaming has evolutionary advantages.

So today, we might be priming our brains to rehearse that presentation or practice that Olympic-worthy gymnast routine. But ages ago, this ability gave our ancestors the ability to become exceptionally better at warding off threats and fighting them.

Even today, performers, musicians, sportspersons — people from all walks of life — practice this technique of mentally rehearsing a particular action before performing them.

Like us, no other species can imagine a future event and rehearse it mentally.

The second benefit conferred by REM sleep on us is increased innovation.

REM sleep and its contents allowed the human brain to form a more comprehensive network of ideas. This resulted in a greater frequency of creativity, insight, and innovation. A high creative association was required to do many tasks. These included building tools, whittling the ends of spears to make decent hunting gear, developing them with time to make survival easy, etc.

Plus, increased sleep intensity also enhanced memory consolidation. A genius creative idea wasn’t of much use if our ancestors got it and forgot it the next day. Without the ability to consolidate creative ideas and innovation in the brain, we’d probably still be tending a bonfire outside caves, flinting stones.

So let’s say that Steve from a clan had a realization. Knapping a certain kind of stone with a particular technique makes excellent blades for chopping that hunted dinner (procedural memory). He would need to remember that information, consolidate it in his brain before passing it on to other clan members.

The third benefit of REM sleep was an increase in the available time.

Now that we slept more efficiently and deeply, the number of hours required to sleep decreased.

With more awake time, we could indulge in more social activities, which eventually had significant consequences for how we interacted. Now our hominin ancestors had more time to bond with their communities. They could talk, gossip, and tell stories to transmit cultural information and increase cognitive abilities.

REM sleep made us smart and social

Our cognitive intelligence and sociocultural complexity separate us from the rest of the animal kingdom. Both these markers result from REM sleep and dreaming.

REM sleep set in motion a different course of history for us by bestowing us with these two defining features. This course would diverge from anything any species had done in the animal kingdom. In a way, REM sleep laid the foundation for what became today’s modern society.

Our cognitive intelligence allowed us to reason, question, solve complex problems, apply logic and use language to communicate complex ideas.

For example, a monkey knows that if he drops a fruit, it will fall on the ground. But a human knew this and discovered gravity and a mathematical formula for it. Also, how the gravity on Earth is different from, say, that of a Blackhole 12 light-years away.

Our sociocultural complexity is also unparalleled.

Humans of one nation can easily cooperate with other countries’ humans based on their shared interests and agendas. The same can’t be said for, let’s say, forest to forest cooperation between American and African chimpanzees.

Our cognitive intelligence also allowed us to create elaborate myths, which led to our complex sociocultural coordination and cooperation. This myth-making made our society and culture way more complicated than any other animal kingdom. Our ability to imagine, use language, and converse complex ideas created shared myths or beliefs. These myths and ideas are socially constructed like religion, money, heaven, hell, etc.

For example, a monkey might have communicated danger to its group. Like, there’s a lion near the pond, and it’s dangerous to go there. But humans evolved to express something more complex. Like, “Oh hey, saw a lion near the pond last night so maybe not go there if you don’t wanna end up dead? And also, since this beast is so fierce, it should be the guardian spirit of our tribe. The people who worship it are our friends. And the people who worship an Eagle should not have help from us if they are ever in trouble.”

No other animal in the animal kingdom did something even remotely close to this. The entire foundation of what we have achieved today begins with this question of why do we dream.

This myth-making was the beginning of how our nation-states and modern society would come into being by sharing certain beliefs.

So today, our nearest cousins are still living in jungles, building their nests the same way our hairy ancestors did. And us? Thanks to REM sleep and dreaming, some specimens of our species are thinking of building a colony on another planet and decoding the secrets of the universe.