Moro Reflex in babies: Everything you need to know 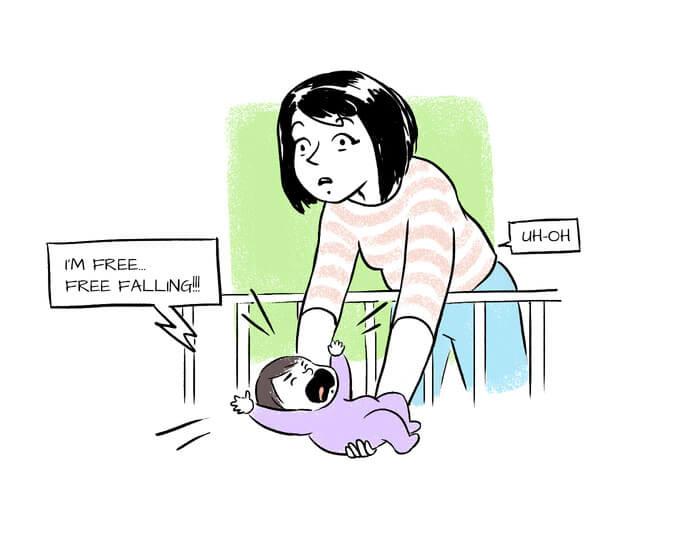 This article will explain why parents find it hard to make a baby sleep.

When an infant monkey is about to fall, it wakes up immediately and tries to grab on to something. A fall from a tall tree-top would be fatal.

In a land far away, an infant monkey falls off a tree while singing Tom Petty’s cult song on its way down.

This life-saving involuntary response that keeps them from falling off treetops is called the Moro reflex.

What’s this got to do with your baby? Well, everything.

The Moro reflex is why it’s so hard to transfer your sleeping baby to the crib.

While our babies don’t sleep on treetops anymore, they still think they do. When you transfer your baby from your arms to the crib, she feels like she’s about to fall. That ‘fallin’ feeling triggers the reflex, waking them up immediately.

In nurseries on this side of the world, an infant of our species exhibits startlingly similar behavior.

Soothing your baby to sleep is half the battle. The other half is transferring the baby to the crib or bassinet when they have fallen asleep on your lap while feeding!

And this time, your fight is against gravity.

When you lift your baby from your lap and lower her into the crib, she perceives a change in acceleration. This change might end up waking the baby!

Ever wondered why your baby is so sensitive to gravity? Like so many other early movements, this isn’t under your cutie’s control either. It’s an automatic response triggered due to the feeling of falling.

The infant feels like she’s falling. She also extends her arms to try to grab on to safety, similar to an infant monkey falling from a tall treetop.

Moro reflex is one of the crucial reflexes. Its absence after birth or beyond six months is attributed to neurodevelopmental abnormalities. Your baby’s doctor will check for this reflex immediately after birth and during follow-up visits.

Why is Moro reflex important

The reflex is automatic. It’s in response to a stimulus that bypasses conscious thought.

It’s perfectly normal. You don’t even need to think about it.

Reflexes are involuntary stimulus-response behaviors of the human nervous system. They do not route to the brain, so the reaction is almost instantaneous.

Evolutionary biologists consider reflexes to be built-in mechanisms. These mechanisms sustain life, allow humans to react to threats, and sometimes respond without thinking.

For example, there’s the rooting reflex. Stroke a baby’s cheek, and the head turns to that side, the mouth opens, and the baby attempts to suck your finger. This reflex is essential because it facilitates feeding.

So now you get why your baby instantaneously throws her hands out and wakes up when you lower her in the crib.

How to identify Moro reflex

You would have seen the doctor pull the infant’s arms while examining and letting them go, causing the sensation of falling. This sudden change in balance causes the reflex and not the distance of the drop.

Moro reflex in a baby: “Quick, Grab on to something.”

The startle reflex is similar to the Moro reflex, with a few differences. The hands don’t open or extend fully in the startle reflex. A sudden noise or movement may also evoke the reflex.

When does Moro reflex go away?

The reflex is present in full-term infants. It begins to disappear around 12 weeks and disappears entirely by six months.

These infant reflexes are building blocks for voluntary motor behaviors that develop with experience and maturity of the brain.

Injuries during birthing, brain malformation, and muscle weakness can sometimes cause the absence or early disappearance of the Moro reflex.

Asymmetrical Moro causes inhibition of the reflex on the affected side. This can be due to a local injury during birth. It can also be caused by damage to the peripheral nerve, cervical cord, or a collarbone fracture.

Prolonged retention of the reflex beyond six to nine months can delay motor development. You should consult a pediatrician in this case.

If your baby has the reflex, it’s a great sign. It shows that their neural development is on track.

However, there isn’t a way to prevent the reflex from occurring. Parents still struggle with making a baby sleep, as it may wake your baby up.

Babies are sensitive to changes.

Any sudden changes in sensory information trigger the reflex. Here are some common triggers of the reflex:

How to reduce startling and soothe a baby?

Here are some things you can do to reduce startling your baby.

“Of course, it is happening inside your head, Harry, but why on earth should that mean that it is not real?” Dumbledore might well have been talking about the Moro reflex.

A crib that can identify the Moro reflex and act in time.

Parents who are great at dealing with Moro reflex suggest these tips and tricks.

Baby products today are not effective at dealing with things that can wake your baby up, like the Moro reflex.

How could they be?

None of them respond as soon as your baby wakes up or falls asleep.

So we built a smart and responsive crib with a baby monitor that can identify the startle reflex and the Moro reflex. It also responds as soon as your baby wakes up and before they cry.