How to get an overtired baby to sleep, according to science 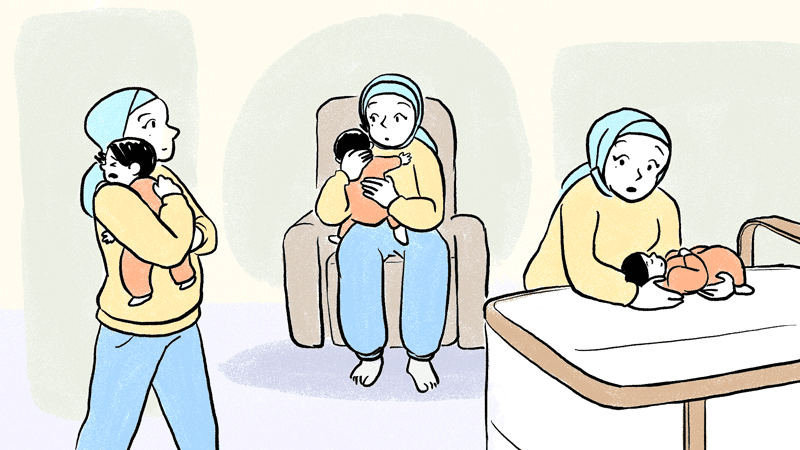 It’s an experience that every parent has gone through—trying to soothe their crying baby to sleep. We know it can be tiring and frustrating, especially when you’re running low on sleep yourself, and right when you put your little one in their bassinet, they wake up and start crying again.

A recently published Japanese study uncovered a specific formula that could help you get your overtired baby to sleep. And no, it doesn’t involve mastery of special skills.

Here’s an overview of the findings and what parents need to know.

This technique will promote sleep and help them sleep longer without startling and waking them up when you transfer them to their bed.

The research, conducted at the RIKEN Center for Brain Science (CBS) in Wako, Japan, recruited 21 mothers and their babies (all under seven months of age).

The researchers used electrocardiogram (ECG) machines to observe the babies’ heart rates and video cameras to observe their behaviors. The findings were revelatory.

I have raised four children, and I performed these experiments, but even I couldn’t foresee the key results of this study until the statistical data came up.

“ I have raised four children, and I performed these experiments, but even I couldn’t foresee the key results of this study until the statistical data came up.”

The researchers found that when the mother held the baby while walking, the baby became calm as their heart rate slowed down within the first 30 seconds. A similar calming effect was observed when the babies were placed in a rocking bassinet or cot. However, the calming effect was not seen when the mother held the baby while sitting or put them in a stationary bassinet.

The researchers found that more than one-third of babies became alert again within 20 seconds of being put to bed, irrespective of how they were put down.

The second their bodies detached from their mothers, their heart rate increased, waking them up. If the babies were asleep for longer before their mothers put them to bed, the chances of them waking up during the transfer decreased.

Walk for 5 minutes, hold for 8 minutes

The key discovery of the experiment was this magic formula. If the mother carried her crying baby for five minutes, then sat with the baby for another eight minutes, she successfully soothed the baby and got them to sleep.

Skipping the eight-minute sitting session increased the chances of the baby waking up again after being put down in the crib.

The researchers observed that these extra eight minutes of holding the sleeping baby helped them fall into deeper sleep, so when they were transferred to the bassinet, their Moro reflex wasn’t activated and they stayed asleep for a longer duration.

In other words, that delay or pause made all the difference.

How being carried affects heart rate

Why does carrying the baby work? The answer lies in a phenomenon called transport response—a physiological response that is seen in species with infants that aren’t mature enough to walk at birth.

Mothers carry their infants in various ways. Animals like lions, tigers, cats, mice, and dogs carry their young ones by the scruff of the neck. Monkeys and apes carry their babies on their backs. Kangaroos and koalas have their famously adorable pouches. Studies have shown that when these infant animals are being carried, their heart rates tend to slow down, which calms them instantaneously.

The same can be seen in humans. However, it takes humans slightly longer to achieve this feat of calming their babies.

Limitations of the study

Even though the soothing method discovered by the researchers is helpful and based on science, it comes with certain limitations, like a small sample size and the fact that only mothers participated in the experiment, and not other types of caregivers like fathers, grandparents, or babysitters.

Also, think of this technique as more of a quick fix for those times when your go-to strategies aren’t working, and not something to rely on for the long haul. The study states that, unlike most behavioral interventions for infant sleep difficulties, this method does not address any long-term improvement of sleep regulation. Instead, it “provides an immediate calming of infant cries and may be useful especially on special occasions when regular sleep routines, breastfeeding, or pacifiers are not effective or available.”

Every baby is different, and sleep is not a mathematical equation. If your baby needs extra support for both falling and staying asleep, you can always ask your pediatrician to help you devise a plan that enables everyone in the family to get more rest.