The science behind dream feed. Do they really work? 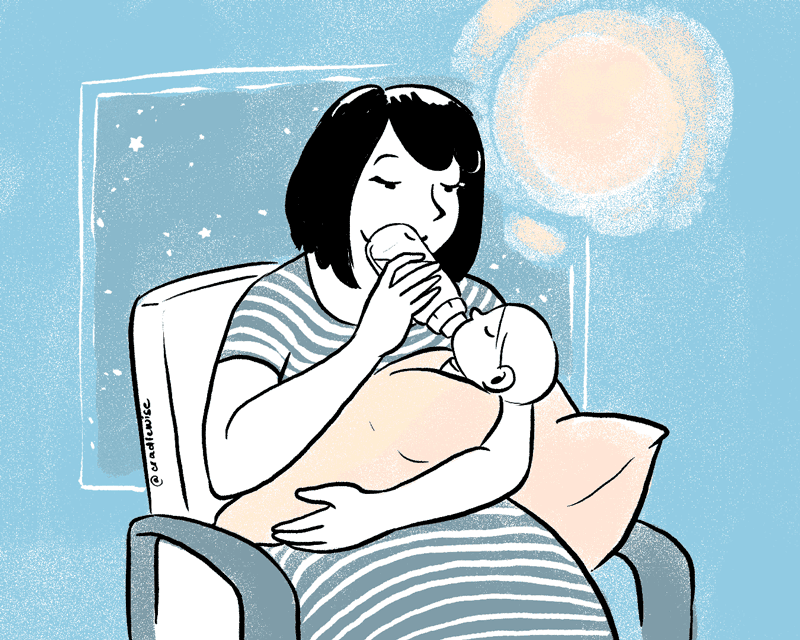 During the first several months of a baby’s life, they spend most of their time sleeping. In fact, it’s recommended for newborns to get 16-17 hours of sleep per day. However, their sleep patterns generally consist of shorter stretches of just a few hours at a time.

As a result, it’s common for new parents to find themselves exhausted and searching for ways to help their baby sleep a little longer at night. After all, quality sleep isn’t just important for your mental and physical health—it’s also important for the growth and development of your little one.

In fact, a child’s brain is developing most rapidly during the first two years of their life and much of this development occurs while they are fast asleep. Out of the 16-17 hours that babies sleep, nearly half of it is spent in the REM stage, during which neural connections form at the highest speed. This helps babies store and process all the new information they are learning at a much faster rate than adults.

Additionally, infants and children who don’t get enough sleep are at an increased risk for health issues, such as obesity, attention and behavioral problems, and poor cognitive development, according to the Centers for Disease Control and Prevention (CDC).

Dream feeds may offer you and your little one a way to get longer stretches of sleep at night while also providing the necessary nutrition for their growing body.

What is a dream feed?

Dream feeding is a popular way to potentially help you and your little one get a little extra sleep at night.

“A dream feed is a late-night feeding session given to a child while they are mostly asleep. This is typically done in the earlier part of the night, before a parent goes to sleep,” says Dr. Nilong Vyas (MD, Pediatrician), founder of Sleepless in Nola.

Let’s say you usually put your baby to bed around 7 p.m., and they naturally wake around midnight to eat.  By adding a dream feed before you go to bed, around 10-11 p.m., you may be able to get several additional hours of sleep before your baby wakes again for the next feeding. Without the dream feed, you would likely be up within one to two hours of going to sleep. As a new parent, these several hours of uninterrupted sleep could make a significant difference in your mental health.

“By proactively feeding them, rather than waiting for them to wake hungry, it can help both parent and baby get a longer stretch of sleep,” shares Jessica Torrisi, Pediatric Sleep Consultant of Little Ones.

Did you know?
You naturally cycle through non-REM and REM sleep throughout the night. A longer stretch of sleep on the front-end of your night may allow you to get some extra non-REM Stage 3 sleep, which is the deepest and one of the most important stages of sleep. This stage is when the body repairs tissues, builds muscle, and strengthens the immune system.

If you choose to sleep train your baby, dream feeds can also be incorporated into your schedule to help reduce nighttime wakings and help your baby sleep longer.

The science behind dream feeds

A variety of factors cause night wakings—hunger being the main one.

Research shows that proactively sneaking in an extra feed earlier in the night usually reduces night wakings as it delays the hunger cues that typically kick in during the early hours of the morning.

“Babies are usually in their deepest sleep in the first half of the night. Around midnight, they usually come into a lighter sleep phase, as their natural melatonin wears off,” says Torrisi. “As a result, a baby will often sleep soundly until around midnight, and then wake for multiple feeds between midnight and morning.”

Torrisi adds, “The dream feed doesn’t necessarily change their overnight milk intake. It simply brings one of their feeds earlier in the night, which helps reduce their wakings from midnight onwards and allows you to get some sleep in the meantime.”

Did you know?
Research shows that infants who consumed more calories, whether from milk or solid food, during the day were less likely to feed during the night.

How to do a dream feed?

“A dream feed will be most effective if done approximately three to four hours after you’ve put your little one to bed for the night—preferably shortly before you go to bed to get the longest stretch of sleep possible,” says Dr. Vyas.

Keep in mind that you don’t want to force your baby to eat. Allow them to latch on their own to reduce the risk of choking.

“When dream feeding your baby, you want to try to keep them nice and sleepy, so aim for as little stimulation as possible,” advises Torrisi. “Keep the room as dark as you can and continue playing white noise to help keep them in that sleep zone.”

As you’ve likely figured out by now, every child is different, and there’s no “one-size-fits-all” method to parenting. Dream feeds can be an effective method of extending stretches of nighttime sleep; however, they may not work for everyone.

“For some babies, the dream feed can disrupt their natural sleep rhythms and actually cause them to wake more overnight,” says Torrisi. “If that happens, it’s best to drop it and let them wake naturally for feeds instead.”

Another scenario might be that some babies may wake easily and have a hard time getting back to sleep following a dream feed.

It’s essential to do what works best for you and your little one. You can always try out a few nights of dream feeds to see if they may benefit you. If not, you can continue to allow your baby to wake and eat based on their own feeding schedule.

When to drop dream feeding

Even if dream feeds have been successful for you and your little one, there comes a time when you will need to stop.

All babies are different, so there is no specific age recommendation for when to stop dream feeding. However, experts generally suggest weaning off dream feeds at six months of age, as long as there are no concerns from you or your pediatrician. This will allow enough time for your little one to show that they are continually gaining adequate weight according to their growth curve and meeting the necessary milestones.

After six months though, babies can start to form habit wakes in the middle of the night in response to stimuli like light, food, or communication.

“They become so used to having a feed at that same time every night that they will start to wake instinctively at that time, expecting to eat,” advises Torrisi. “To help prevent that habit from forming, I generally recommend dropping the dream feed by six months old.”

In some cases though, it may be beneficial to continue dream feeding past six months of age.

“Ideally a child should be capable of sleeping through the night by that time. However, if your baby is still waking to feed multiple times per night, continuing to offer a dream feed in the earlier part of the night could be useful to eliminate those additional night wakings,” says Dr. Vyas.

How do I stop dream feeding my baby?

Once you decide to drop the dream feed, there are a few different methods.

However, it can be more difficult for breastfeeding parents to know how much breast milk their baby consumes. In this case, you could time the feeding session and reduce the time you allow your little one to eat during a dream feed session. For example, you could reduce the dream feeds by one to two minutes every two to three nights until you are down to only one to two-minute sessions. At that point, you’ll drop the dream feed altogether.

Some parents find it easier to drop the dream feed cold turkey. If your baby is not drinking very much of their bottles or not nursing for very long, cold turkey may be an option. It also may be the best option for babies who get upset by the decrease in their formula or breast milk during the weaning process.

Again, it’s important to do what’s best for your baby’s unique needs. If you’re planning on dropping nighttime feeds altogether, discuss it with your pediatrician to ensure that your baby is gaining weight as expected and there are no other concerns.

Sleep and nutrition are crucial factors in your child’s development, especially during the first two years when the brain is most adaptable. Dream feeds may provide you with an option to ensure your little one is getting adequate nutrition while allowing you and your baby to get longer stretches of sleep during the few months after birth.

And let’s face it, we could all benefit from a little more sleep during the postpartum period.

Q: When should you not dream feed?

A: It is recommended to drop dream feeding when your baby turns six months old.