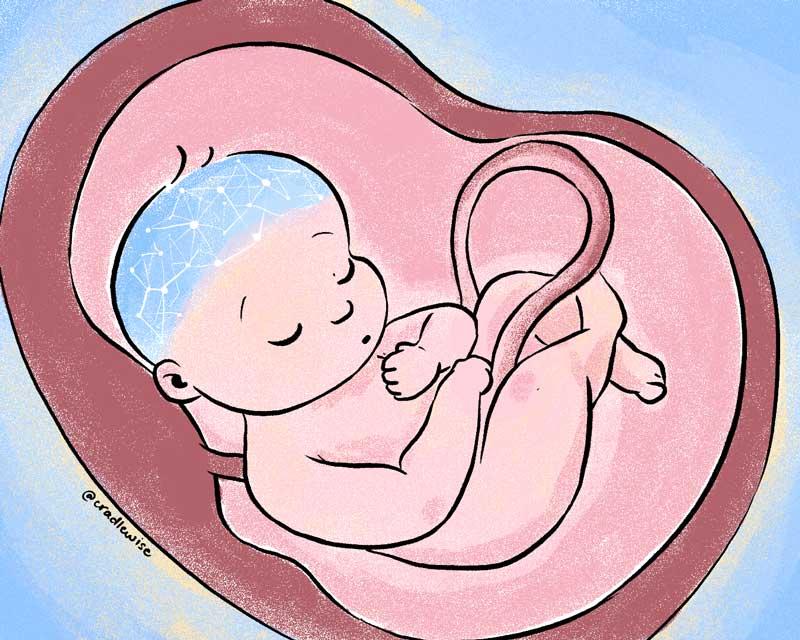 Way before your little one makes their grand debut in the world, you start interacting with them. You may notice the little kicks, movements, and other activities—how they’re quiet when you’re walking around, but active when you lay down for some rest.

We’ve got these answers, and more, in our expert-backed guide to understanding baby’s sleep in utero.

What’s going on in the womb?

Babies do sleep in the womb. In fact, they sleep a lot.

By the time you reach about 38 weeks, your baby is sleeping 95 percent of the time! And it’s during this time that your little one’s brain is developing at a supersonic rate. This will lead to around 100 billion neurons in your baby’s brain when they are born.

How do baby sleep patterns develop?

Even with technological advancements, it’s impossible to measure the direct brain activity of a baby who is still in utero. Instead, researchers can learn about babies’ sleep habits from observing their eye movements.

As your little one’s nervous system grows and develops, a sleep-wake cycle starts to emerge. Around the seventh month of pregnancy, scientists can observe a baby’s first rapid eye movements.

A baby’s developing brain moves back and forth between REM and non-REM sleep every 20 to 40 minutes. During REM sleep, the baby’s brain waves show a lot of activity, similar to an awake brain. During non-REM sleep, their brain activity shows periods of rest.

These sleep-wake cycles indicate the development of your baby’s first mature sleep patterns.

Did you know?
Your little one sleeps about 95 percent of the time in your womb.

Your little one sleeps about 95 percent of the time in your womb.

Scientists don’t know yet whether these sleep cycles slowly develop over time, or simply appear one day. However, in 2009, researchers studied sheep fetuses to understand when the earliest sleep patterns start. Researchers found that the sheep fetus showed brain activity which suggested very early and immature sleep cycles that later developed into more mature patterns.

Why do babies need to sleep in the womb?

Babies need to sleep in the womb because it’s during the deep REM sleep that their neural connections are rapidly developing. As these neural connections form and strengthen, different areas of the baby’s brain become active. The ability to hear, move, synthesize information and respond to certain voices and sounds develops when they sleep.

According to Samantha Radford, PhD, an exposure scientist with a focus on maternal-child health and the owner of Evidence-Based Mommy,

Sleep allows their brains to develop and allows them to process their experiences. It also helps develop their ability for memory.

“ Sleep allows their brains to develop and allows them to process their experiences. It also helps develop their ability for memory.

Every bodily function of your baby—from their ability hear, see, understand, and process sounds and sensations—is a result of their brain development or their neural pathways forming and connecting. And most of this magic happens while your baby is sleeping.

Do babies dream in the womb?

Now that we know babies sleep in the warmth of your womb, it’s only natural to wonder, do babies dream in there, and if they do, when do they start?

All signs point to—probably yes, thanks to our observations of REM. According to Dr. Radford, “While we don’t know for sure if babies in the womb dream, we know that their sleep patterns include REM sleep, which is when we dream, so it is likely that babies do dream in utero.”

The four stages of sleep by trimester

At 11 weeks, the brain cells that cause us to fall asleep are not yet formed, but this will happen soon. Before it does, your little one will be in a constant state of sleep.

By this time, the brain cells that cause your baby to fall asleep have formed, and they’ll start waking up and falling asleep in cycles.

At seven months, your baby’s eyes will start moving rapidly as if they were dreaming. This first sign of eye movement tells us that their brain is going back and forth between REM and non-REM sleep, and that they’re developing adult-like sleep cycles.

During the last three months in the womb, their neural connections will grow at a meteoric pace when they are in REM sleep—so much so that a week before they are born, their REM sleep increases from nine to 12 hours each day.

Are sleep patterns in the womb indicative of how a baby will sleep after birth?

Yes—researchers have found connections between how babies sleep during late pregnancy and their snoozing patterns after they are born, although maybe not in the way you would expect.
As Dr. Radford says, “A 2008 study showed that the more the baby sleeps in utero, the less they sleep after birth. This actually means the child has a more mature sleeping pattern after birth—after all, newborns need to wake every few hours to eat.”

While your little one is dozing off in your womb, you can rest in the knowledge that their hours of sleep are helping in the development of their brain and body, preparing them for the time when they arrive in this world and meet you.