What to know about safe sleep for babies in 2023 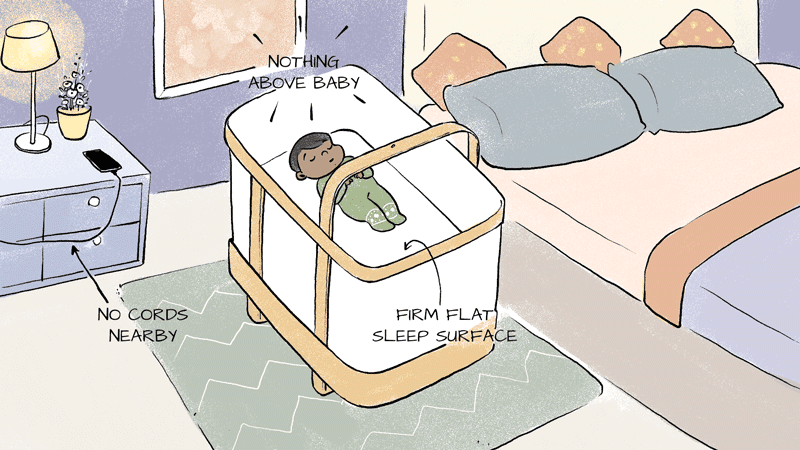 As parents, we know that there’s nothing more important to you than your baby’s safety and well-being. Newborns spend most of their time sleeping—a whopping 16 to 18 hours each day. When considering safe sleep for babies, it’s important to be aware of all the factors, such as their overall environment (including the room temperature and airflow), sleeping position, bedding, and what they’re wearing.

So much has changed in the world of sleep last year that it can be hard to keep up! Last year, in 2022, the American Academy of Pediatrics (AAP) revised its safe sleep guidelines for infants for the first time in five years. President Biden signed the Safe Sleep for Babies Act into law, which bans products such as inclined sleepers and crib bumpers. And a new study identified a biochemical marker in babies’ blood, which can help determine if newborn babies are at risk for SIDS.

We’ve compiled all the most up-to-date baby sleep safety news from 2022 into a handy cheat sheet. As you head into 2023, here’s everything you need to know about your baby’s safe sleep in a nutshell.

In 2022, for the first time since 2016, the AAP revised its sleep safety guidelines for children up to one year old. The revisions are based on 159 scientific studies and aim to promote safe sleep among babies.

According to the CDC, there are about 3,500 sleep-related deaths among U.S. babies each year, including sudden infant death syndrome (SIDS), accidental suffocation, and other unknown causes.

Most of these deaths can be prevented by taking certain precautions that AAP have outlined in their guidelines. Here’s a brief rundown of the most important points:

Here are the AAP’s new 2022 safe sleep guidelines in detail.

Why the Safe Sleep for Babies Act matters

The Safe Sleep for Babies Act law bans inclined sleepers for infants and crib bumpers. It’s illegal to make or sell these products beyond November 12, 2022, irrespective of their manufacture date.

Learn more about the Safe Sleep for Babies Act.

The new study on SIDS

A May 2022 study in eBioMedicine identified a biochemical marker in babies’ blood that can help determine SIDS risk. The study found that those who passed away from SIDS had lower levels of butyrylcholinesterase (BChE) than those who died from other causes.

Pediatrician Molly O’Shea, MD, founder of Birmingham Pediatrics in Bloomfield Hills, Michigan adds that the study is a solid starting point for future research. “It doesn’t show a cause-effect relationship, nor does it indicate with certainty that low levels of the cholinergic biomarker always mean that SIDS will happen. The flip side is also true—normal levels were not always protective. It does, however, open up a new research question and opportunity for studies of infants going forward,” she says.

While this study is definitely a way forward, it’s too early to jump to any conclusions about the cause of SIDS. What is certain is that parents should continue practicing the safe sleep practices recommended by the AAP.

You can read the in-depth analysis of the study here.