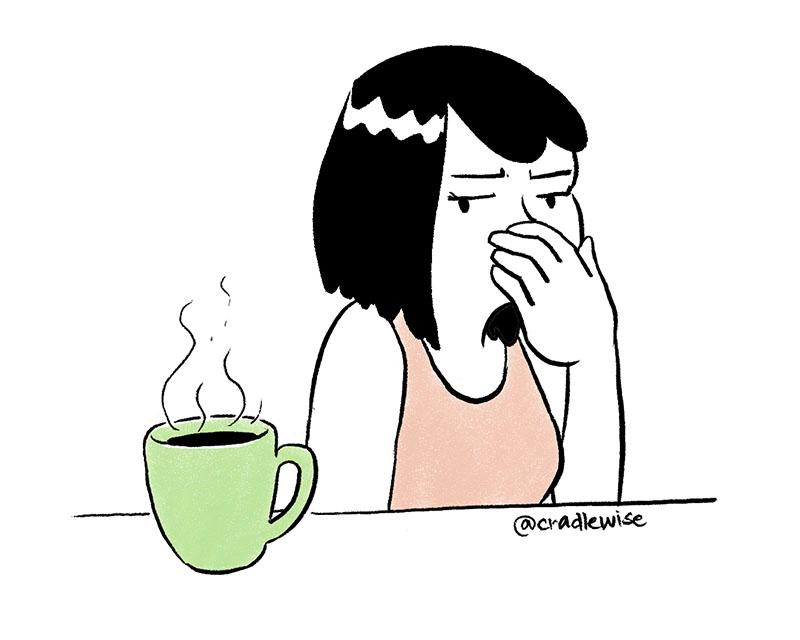 Hey, congratulations! You are probably reading this post because you are either pregnant or thinking of getting pregnant. Either way, welcome to the start of a beautiful journey.

Ask any mama, and they would tell you that their first trimester was the trickiest to get through. In your first trimester, your baby is very fragile and vulnerable. Thus, your body changes to accommodate the little one inside. This might lead to you experiencing a lot of uncomfortable symptoms. Feeling exhausted and sleepy all the time, avoiding foods you once devoured, and nausea might start to kick in.

Aversion to certain foods, nausea, and exhaustion are symptoms of a condition called morning sickness. This is common among most pregnancies and is definitely not an illness. It is, in fact, thought to be a sign of a healthy pregnancy. It is an indication that your body is producing many pregnancy hormones that will support the development of your baby.

Nausea and vomiting in pregnancy have been present in pregnant women for a long time. So there has to be a reason from an evolutionary perspective as to why it occurs. What if we told you that your body might be causing morning sickness to protect your baby and you during pregnancy?

In this article, you will learn about what causes morning sickness, why it is a sign of a healthy pregnancy, and how to manage the symptoms.

What is pregnancy nausea?

Pregnancy nausea or morning sickness is a condition that causes nausea, vomiting, and exhaustion in early pregnancy.

When does pregnancy nausea start and end?

Symptoms of morning sickness usually begin at week 6 but can also start as early as week 4 or 5 of your pregnancy. They peak around weeks 8 to 12 and gradually decline as you enter your second trimester.

Did you know?
The term “morning sickness” might be misleading. The thought of throwing up as soon as your feet touch the ground might be the common idea when you hear the word “morning sickness.” But this is a myth as pregnancy nausea and vomiting can occur at any time of the day.

Why do you experience pregnancy nausea?

Descriptions of vomiting during pregnancy were identified as early as 2000 BC. It has been a common condition for all humans from the hunter-gatherer time till date.

Pregnancy nausea is thus an infamous side effect of pregnancy since time immemorial.

Everything that happens in our body happens to either protect or develop cells. But why has nausea and vomiting in pregnancy persisted for a long time in history? Why does our body reject certain foods and smells that cause us to avoid foods we once couldn’t live without?

One answer is to eliminate the toxins in certain foods. Our adult bodies are capable of ingesting small amounts of toxins found in everyday foods that we consume. But in pregnancy, our tolerance for these toxins decreases. This might be harmful to both the baby and the mother.

The timeline: How the period of pregnancy nausea corresponds to when the growing baby is the most vulnerable

Did you know?
There is a notable and striking correspondence between the time your baby is the most vulnerable and your body working to eliminate toxins through nausea and vomiting.

Until your 4th week, your little one is still a small cell dividing rapidly. Toxins ingested via food will not cause any significant harm to the embryo during this time. Up until this time, there’s no pregnancy nausea. After 4 weeks, your baby’s organs will start forming.

In the fifth week, their developing central nervous system, heart, and ears become sensitive. This period is also when your baby is the most vulnerable and needs protection. You might experience symptoms of nausea and vomiting around this time, that is, your 5th or 6th week of pregnancy.

So, in short, pregnancy nausea will peak during the time when your growing baby needs the most protection.

An evolutionary perspective: How nausea and aversion protect mother and baby

Consider the time when our maternal ancestors consumed raw, spoiled food in the wild that are known to have natural toxins. This unregulated diet can prove to be harmful in the first trimester when the developing embryo is most vulnerable.

A 2000 study conducted by Flaxman and Dr. Sherman concluded that pregnancy nausea prevents the consumption of spoiled or burned meat, fish, and eggs. These might affect not only the growing embryo but also you.

Your immune system is suppressed to prevent it from attacking the embryo as a foreign object. Thus, nausea and vomiting in pregnancy protect not only your baby but also you from toxins that might be present in food.

Several changes in your pregnant body might potentially cause your pregnancy nausea. Experts are still at a loss to identify the exact cause of nausea and vomiting in

Imagine you and your friends sitting at a lunch table. All the seats are taken. If a new friend was to drop by and sit with you guys, you’d have to move around to make space for her.

The organs in your body are like your friends at the lunch table, while the growing embryo is like the new friend.

Similarly, when the new embryo is growing, someone needs to tell the organs in your body to change their functions to accommodate the growing embryo.

Soon after conception, your body starts producing a high level of pregnancy hormones. The two main pregnancy hormones that might potentially cause nausea and vomiting are estrogen and human chorionic gonadotropin (HCG).

You might already be familiar with estrogen even before your pregnancy. But the role it plays after conception changes. Estrogen helps in the formation of the blood vessels in the placenta. It also helps in the development of your baby’s initial organs.

HCG helps your body recognize the new embryo and aids in producing the hormone progesterone. This helps in maintaining the uterine lining and prevents menstruation. HCG is also the hormone your pregnancy tester detected to confirm your pregnancy.

Unfortunately, these very essential pregnancy hormones have their side effects as well. They increase the blood flow to the vomiting center of your brain. Yes, you heard it right! There is a part of your brain that is called the vomiting center. It triggers nausea and aversion to foods containing toxins. In pregnancy, the hormones make this center highly sensitive to taste and smell.

Area postrema is a part of your brain which has the Chemoreceptor Trigger Zone (CTZ). The CTZ is the brainstem that triggers the vomiting response. There are chemical receptors in the vomiting center for different types of toxins. If any toxins are ingested, it triggers nausea, vomiting, and subsequent aversion to those foods. Vomiting expels the toxins from the stomach, and aversion ensures that you stay away from such foods. This helps your body distinguish between safe and toxic foods.

The sudden flush of blood flow to the vomiting center or the CTZ increases the concentration of toxins that reach the CTZ. This is why you find certain foods you once loved very repelling.

Relaxation of the digestive muscles

During pregnancy, the muscles around your digestive tract relax. This makes it easier for food to travel up and down. Since the muscles guarding your reflux are less efficient, there is an increased acid flow into your esophagus.

Your digestive system also becomes very slow. This slows the absorption rate of foods, including their toxic components, into your system. Thus, the food is confined to your stomach for a long time. This increases the opportunity for your body to expel toxic foods through vomiting.

All these factors are interrelated to each other and together cause vomiting and nausea. They are all responsible for that constant swirling storm in your tummy.

How do everyday foods that you consume become toxic during pregnancy?

Vegetables and fruits that you might otherwise consume regularly have a component called phytochemicals. These are protective layers in plants that act as a defense against potential threats like pests, fungus, and bacteria. These are also responsible for their strong smell and color in blueberries, broccoli, and garlic.

We consume these naturally occurring compounds in our everyday diet. While some of these might offer us health benefits, some can be poisonous as well. In pregnancy, especially since our tolerance for toxin threshold is low, our body rejects foods that contain these compounds.

Did you know?
Children have gained a reputation as “picky eaters” since they are particularly vulnerable to these chemicals. Some of their tissues are still undergoing rapid cell division. And so, they avoid foods that might contain higher levels of phytochemicals.

Generally, these phytochemicals help reduce foodborne illness and food poisoning. But might become harmful during pregnancy if ingested in high amounts. Consuming these in large proportions might potentially lead to birth defects as they can quickly turn into mutagens, allergens, teratogens, and carcinogens.

So even though you might feel tired and exhausted from all the nausea and vomiting. There is still a cherry on top. You have now learned that pregnancy nausea is nature’s way of protecting both you and your little one. Even if it is at the expense of your comfort. But what if we told you that there are more benefits than you might think to this not-so-good experience?

Pregnancy nausea is not an indicator of the health of the baby. You can have a healthy pregnancy even if you do not experience these symptoms. In either case, there is no harm to your baby.

Interestingly, nausea and vomiting in pregnancy in early pregnancy are tied to smarter kids. Studies show a link between pregnancy nausea and the long-term neurocognitive development of babies.

According to Irena Nulman and her team, young adults of mothers who experienced severe pregnancy nausea in early pregnancy scored higher on a few cognitive tests than their counterparts.

Nulman says that the differing hormone levels could be one possible explanation for these results. According to one hypothesis, vomiting reduces caloric intake, decreasing insulin secretion. Low insulin, in turn, boosts levels of other hormones. These hormones are known to play a role in the development of a healthy placenta and a healthy blood supply to growing brains.

On the brighter side of pregnancy nausea

If you are experiencing pregnancy nausea, we understand that this might be tiring for you. But on the brighter side, think of this as wellness insurance. You feel nauseous and exhausted during the early weeks of your pregnancy to reap the benefits in the future.

A: For most women, pregnancy nausea goes away by 14 weeks of pregnancy. However, this may differ from woman to woman. While for some women, it can last for several weeks or months, for other women, it can also last throughout the pregnancy.

Q: Is it normal to be nauseous all day when pregnant?

A: Even though it’s commonly called ‘Morning sickness,’ nausea and vomiting can occur any time of the day and not just in the morning. Some pregnant women can feel nauseous all day.

Q: When does morning sickness start and end?

A: Pregnancy nausea or morning sickness usually starts at around five to six weeks. It usually fades by the end of the first trimester, between 14 and 20 weeks.

Q: When does morning sickness peak?

A: Morning sickness usually peaks between nine to 10 weeks of pregnancy.