Myelin sheath: How we learn and ways to enhance learning in babies 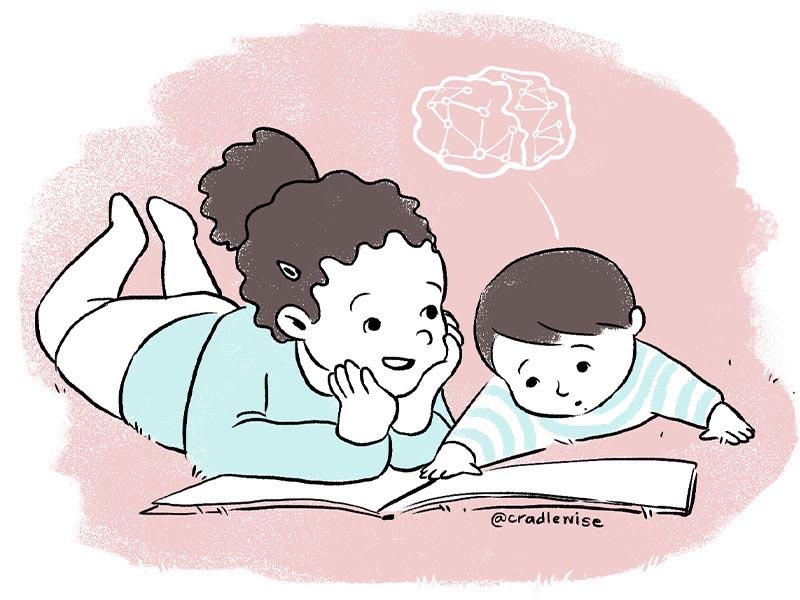 Practice makes perfect. There’s a lot of truth to this old adage. You must have observed that learning any new skill takes time, patience, and training. So how do babies learn? In this article, we’ll look at what happens behind the scenes when you or your baby learn a new skill, what is the role of myelin, and what you can do to improve learning when you are pregnant.

Remember that time you were learning a new language? It’s hard at first. You don’t seem to remember the right words, you fumble and forget. It requires a lot of your attention too. And as you do it over and over again, something changes.

It starts connecting in your head. Then you get better and better at it. Until, one fine day, you’re ‘in the flow,’ and you realize it’s effortless.

We’re all familiar with this ‘learning’ process. Ever paused and wondered how it happens?

If you haven’t earlier, there isn’t a better time than now. As a parent, you are going to be actively involved in your baby’s learning.

You will help them talk, walk and learn a bunch of other skills. Understanding what happens when we learn will come in handy when you’re helping your baby learn.

The fascinating structure of your brain

It all starts with the brain, the thing in your head which does all this learning. The human brain is the most complex structure we know. But how complex is it, really?

To truly appreciate this, let’s look at some numbers.

You might have already heard of neurons. They are the core units of our brain and nervous system. A network of neurons is responsible for everything we know and experience. Anything we see, hear, touch, smell, taste, and sense is transmitted through the network of neurons.

The average person has about 100 billion neurons. That’s a staggering number.

To really get a sense of how large this is, let’s suppose we place the neurons of a person end to end.

If we start from downtown San Francisco and go West, we could go around the earth five times. Wow, that’s a lot.

But wait, we still have neurons leftover. So now, let’s place them vertically and see how high they go.

With what’s leftover after we went around the world five times, we can go vertically, TO THE MOON AND BACK!

Yes, all the way to the moon and back. Wow. That’s how long your nervous system is.

And this extensive network is inside each one of us.

How do they send information to each other, though?

Neurons: How do they function?

To understand that, let’s first look at a neuron.

We’ll start with an image of a tree.

If we remove the leaves of this tree and stretch it out – we have a neuron.

So the branches at the head of the neuron are called dendrites.

The stem of the tree is called the axon. And the roots of the tree are the axon terminals.

A few roots of neighboring trees touch our tree’s branches and exchange chemicals at any time. This isn’t a big deal for our tree. He’s social and likes talking to his neighboring neurons.

How does information move throughout your body?

If enough contact is made and chemicals exchanged, it triggers an ‘action potential.’ Our tree is then electrocuted.

Electricity zaps down the tree and into the roots. The roots themselves touch a set of other branches.

The points of contact between the roots and the branches are called synapses. Each neuron can have hundreds to thousands of synapses.

When the electricity reaches the tree’s roots, the tree passes chemicals to the branches it touches.

Once sufficient chemicals are released, the adjoining trees zap as well, just like the earlier one did.

This is how information moves through the nervous system. Shocking, one might say 😀

So when you are trying to learn to speak in a new language, one set of neurons might help you recall the exact words. While other neurons alert your tongue, mouth, and vocal cords to move in a certain fashion to say it aloud. When those neurons fire simultaneously, you get better at saying those particular words on command.

If you are with me so far, let’s take it up a notch.

Not all neurons are created equal. There are fast neurons, and there are slow neurons.

So why this difference? Here’s where it gets interesting.

What is Myelin Sheath, and how does it help with learning?

Did you know?
A nerve is nothing but a bundle of axons.

Just like rings in the bark of a tree, the myelin sheath covers the axon in layers of lipids. The myelin covers are not continuous and have small gaps.

Are you wondering, “What is the function of myelin sheath?” Myelin has two crucial roles:

2. Insulate and protect the axon

Why is myelin important?

You see, myelination is a significant factor in the pace of communication. Information passes through axons covered in myelin much faster.

If a nerve is like an electrical wire, then myelin is like the plastic insulation surrounding the wire. It prevents signals from leaking while being transmitted in the nerve.

So they perform the role of efficiently transferring electrical impulses through the axon.

So why aren’t all neurons myelinated? Wouldn’t it serve us better to have neurons communicate as fast as possible?

Well, myelination takes up a lot of space. So there’s always a trade-off. If they aren’t myelinated, you can fit more axons into a particular space.

Also, most neurons in the brain have synapses close to them. Myelination is not really useful for short distances.

How do babies learn?

What has all this got to do with learning? We have seen how vital myelin is for transferring information quickly.

When we perform an activity, a set of neurons pass information. As we repeat the activity over time, the nervous system recognizes the need to speed up this particular collection of neurons and synapses.

The faster the neurons transfer info, the easier it is to perform the activity.

And what increases speed and synaptic strength? Myelin.

As we learn a new skill, repetition and practice increase the extent of myelination around the axon.

A thicker myelin sheath increases the speed with which neurons transfer and interact. And we get better at all sorts of tasks. Motor skills, reading, memory, language, and any skill you can think of rely on repetition and myelination.

Significance of myelination in babies

The fastest development in our life is in the womb of the mother.

Your baby has to learn a wide range of skills to thrive in the environment they find themselves in. The pace and scope of learning are immense.

Second, they develop internal senses like kinesthetic, pain, heat, etc., that help figure out themselves.

Finally, they combine these senses to walk, talk and play.

It’s no wonder most myelination occurs during early life.

Did you know?
When the myelin sheath is damaged, nerve impulses slow or even stop, causing neurological problems.

What nutrients are necessary for myelination in children?

Early life nutrition shapes myelination and, consequently, cognitive outcomes. There is no need to wait until the baby is born to give it a head start in life. This article on the placenta provides an idea of how these nutrients reach your baby in the womb.

How to increase myelin?

A suite of nutrients, growth factors, and hormones essential for brain development are abundant in breast milk, including critical building blocks such as DHA and choline.

Fatty acids are structural components of myelin. Both prenatal and postnatal fatty acid deficiency reduces the amount and alters the composition of myelin. Get adequate DHA and fatty acids for better neuron creation and synapse formation.

Iron plays a role in myelin synthesis. Even marginal iron deficiency during prenatal and early postnatal development decreases myelin synthesis. It alters myelin composition, which is not corrected with iron repletion.

Iodine deficiency in the mother can cause problems. It affects neuron creation, synapse formation, and myelination. It also affects the baby postnatal due to its deficiency in breast milk.

Lack of zinc can impact neuron formation, migration, and generation of synapses. It can reduce the risk of preterm birth when taken as a supplement.

Choline is essential for the early development of the nervous system.

B Vitamins and Folic Acid

Gestational and early postnatal vitamin B6 deficiency results in reduced myelination. Deficiency in folic acid and vitamin B12 is associated with early nervous system formation defects.

Thus, a diverse diet by the mother ensures adequate nutrition for the baby’s brain development. It sets up the foundation for learning and development milestones.

Q: At what age is myelination complete?

A: The process of myelination starts around birth and is most rapid in the first 2 years of a baby’s life. It reaches phases of completion at around 30 years of age.

Q: What does the myelin sheath protect?

A: Myelin sheath protects the nerves and enhances nerve transmission.

Q: How does myelin affect learning?

A: Myelination is a significant factor in how fast the neurons in our brain communicate. Information passes through axons covered in myelin much faster. Hence, myelin leads to faster learning and recalling abilities.

A: Studies show that Vitamin D can help in the repair of myelin.

A: Here are the foods that help in repair of the myelin sheath: