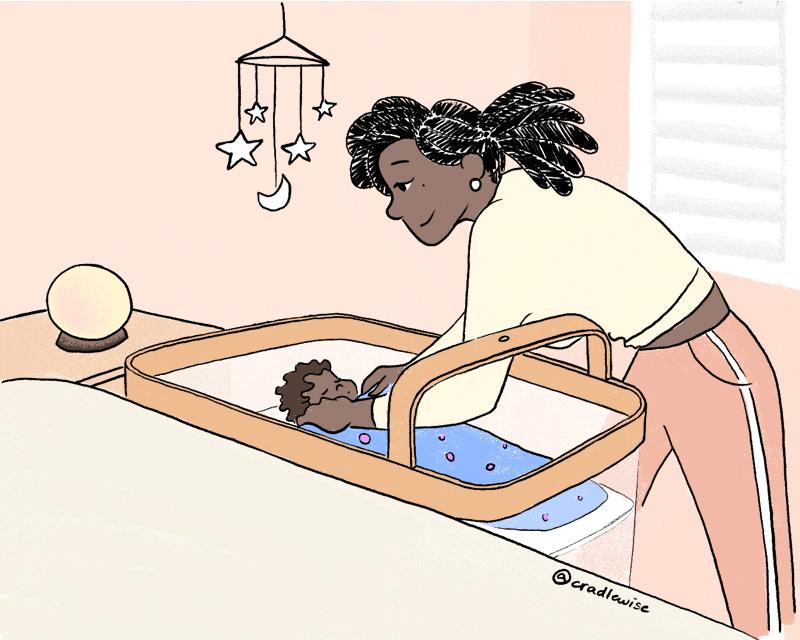 Last week, a new study on Sudden Infant Death Syndrome (SIDS) went viral after news headlines and social media posts claimed that scientists had discovered the cause of this condition: a biochemical marker that could help identify babies at risk of death.

However, experts have urged parents to be cautious of the misleading headlines because the authors of this study used a sample size that’s too small to come to any definitive conclusions. It’s also important to keep in mind that the cause of SIDS is still unknown. It’s believed to be caused by various factors, not a single entity.

Here, we break down the findings and what parents need to know.

SIDS or Sudden Infant Death Syndrome is the sudden and unexplained death of a healthy baby under one year of age (usually when they are asleep). SIDS takes the lives of more than 2,000 babies in the United States each year. This tragic and heartbreaking phenomenon often leaves parents guilty and confused about what they could have done to prevent it, especially since SIDS doesn’t have a clear cause or explanation of why it occurs.

What the new SIDS study found

The study published on May 6th in eBioMedicine has identified a biochemical marker in babies’ blood, which can help determine if newborn babies are at risk for SIDS. The study draws a link between a baby’s risk of SIDS and the activity of an enzyme called butyrylcholinesterase (BChE) in their blood shortly after birth.

Dr. Carmel Harrington and colleagues Naz Al Hafid and Karen Ann Waters conducted a small-scale study. They collected dried blood samples right at birth from 600 babies and measured them for BChE. Of the 600 infants in the study, 26 died from SIDS and 30 from non-SIDS-related causes before their second birthday.

BChE plays a crucial role in the brain’s arousal pathway (the brain’s ability to wake us up). Scientists have theorized that the part of an infant’s brain that controls breathing and waking plays a vital role in SIDS.

Researchers believe that low levels of this enzyme indicate “‘arousal deficit,”‘ meaning that the baby’s ability to wake up or respond to their external environment will reduce, making them more vulnerable to SIDS.

“Babies have a very powerful mechanism to let us know when they are not happy. Usually, if a baby is confronted with a life-threatening situation, such as difficulty breathing during sleep because they are on their tummies, they will arouse and cry out. What this research shows is that some babies don’t have this same robust arousal response.” Dr. Harrington said in the press release of her study.

However, it’s essential to keep in mind that not all babies with low BChE levels will suffer from SIDS. The study simply suggests that low BChE levels indicate their vulnerability before SIDS.

The study concludes that further work needs to be done in this direction “to determine if the specific activity of BChE could potentially be used as a biomarker to identify and prevent future SIDS deaths.”

Some of the risk factors for SIDS include family history, premature birth, and smoking during pregnancy. According to the researchers, animal studies have linked secondhand smoke to reduced BChE levels. However, enzymes like BChE and the baby’s nervous system, in general, are affected by many changes in the first six months of the baby’s life.

According to the study’s authors, the findings can lead to new methods of screening babies for SIDS.

However, there are many reasons why it’s too early to jump to any conclusions about the study and the findings regarding BChE levels and how it can be used to screen babies vulnerable to SIDS.

First, experts don’t yet know what “normal” enzyme levels look like. Dr. Harrington and her team didn’t have access to fresh blood samples for the BChE enzyme, and therefore, they didn’t measure its absolute levels. In the study’s observations, there’s some overlap between the BChE levels of the babies who passed from SIDS and the babies who didn’t.

“The claim also oversimplifies the new study’s findings, which do not label the enzyme as a definitive biomarker,” said Dr. Rachel Moon, chair of the American Academy of Pediatrics’ Task Force on SIDS, told USA Today.

According to Moon, though the enzyme levels were statistically different in the study, there was “enough overlap” of these levels between the SIDS cases and the control group that a blood test would not bring “reasonable predictive value.”

“The problem with using this test prematurely is that it might unnecessarily alarm parents that their baby will die and, to make it worse, be inaccurate in warning,” says Dr. Moon. She further stated that researchers only tested blood samples of 67 babies who died of SIDS, and “The findings need to be verified by larger studies and diverse populations.

“Dr. Molly O’Shea (MD), the Founder of Birmingham Pediatrics, adds, “The study is a good starting point for further prospective studies. It does not show a cause-effect relationship, nor does it indicate with certainty that low levels of the cholinergic biomarker always mean that SIDS will happen. The flip side is also true: normal levels were not always protective. It does, however, open up a new research question and opportunity for studies of infants going forward.”

According to Dr. O’Shea, “SIDS is multifactorial. Almost certainly, an underlying biological predisposition exists, and this study may help us understand more about that aspect of the risk. But other things also contribute to SIDS, including sleeping position, sleeping environment, and infant development.”

Multiple studies have stated the numerous possible causes like brain abnormalities, genes, external factors, an infant’s vulnerability, etc. Other studies have noted low birth weight, premature birth, and living with a smoker as risk factors for SIDS. According to Mayo Clinic, other factors that might increase the risk of SIDS include having a family history of SIDS, if the mother is younger than 20, or when the babies born are twins/triplets.

“I was told that “these things happen,” that “it was tragic,” and even to “go home and have more babies.” But I couldn’t.” Carmel wrote her account in Newsweek. But instead of going home, Carmel dedicated the next three decades of her life to finding the cause behind SIDS.

“It is often thought, especially by those who have not had to suffer the visceral assault of a child’s death, that there comes a time when you are “over it.” I am a testament to this fallacy. A day did not go by that I did not think about my son and how he died. And, because I am a biochemist, I started thinking about the chemistry of the ANS [Automatic Nervous System], because after all, it is just chemistry.”

With her new research, Harrington successfully identified a potential sign, a biomarker, for SIDS.

While findings are optimistic, it’s important to continue following safe sleep guidelines. Here is a refresher:

Did you know?
Sleeping on a sofa or armchair with your baby can increase the risk of SIDS by 50 times.

Q: How does sharing a room with my baby prevent SIDS?

A: Sleeping in the same room as your infant (as opposed to bed-sharing) reduces the risk of SIDS by 50 percent. AAP recommends babies share their parents’ room ideally for the first year or at least for the first six months.

“Sleeping in the same room with parents allows you to hear your baby and respond to their needs quickly. In doing so, early signs of difficulty can be managed and reduce risk,” says Dr. O’Shea.

Q: Is it okay if my baby sleeps on their side?

A: No, placing babies to sleep on their sides increases the risk for SIDS. As per AAP, it’s best to put babies wholly on their backs when sleeping.

A: AAP notes that breastfeeding is linked to lower rates of SIDS. According to research, the longer you exclusively breastfeed your baby (meaning not supplementing with formula or solid food), the lower their risk of SIDS.

A: A study has shown that using a pacifier during sleep reduces the risk of SIDS by 90 percent.

Q: What is the age range for SIDS?

A: According to NIH, Most SIDS deaths happen in babies between one month and four months of age, and the majority (90%) of SIDS deaths occur before a baby reaches six months of age. However, SIDS deaths can happen anytime during a baby’s first year.