Music for babies and how it helps in their brain development 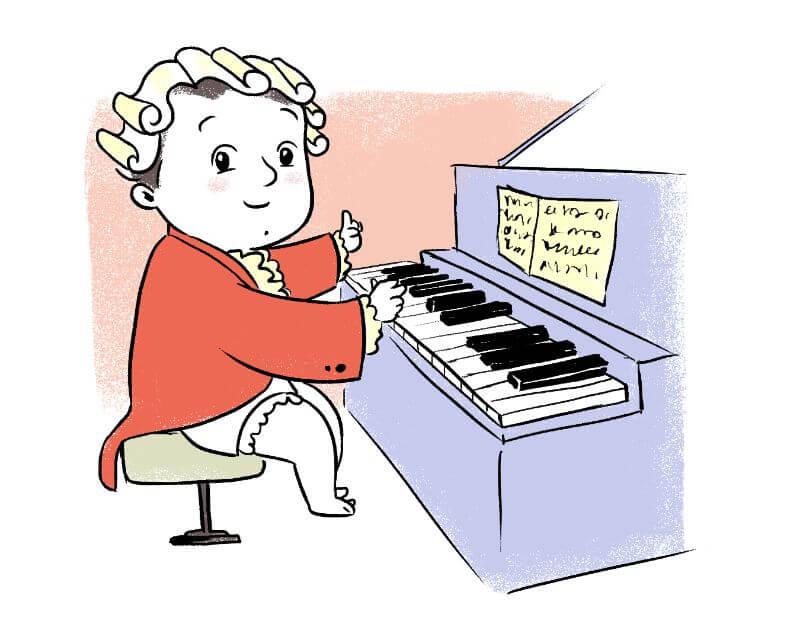 All babies are born musical geniuses. Most stop being one when they grow up. Music, like language and laughter, is one of those things that make us human. And it goes far beyond just white noise or baby sleep music.

The importance of music from an evolutionary standpoint is hotly debated, but most people agree that better musical abilities correlate with longevity, happiness, and well-being. In this article, we’ll explore what you can do to help your baby hone this innate talent.

When can babies hear in the womb?

First, let’s understand the auditory world from your baby’s point of view.

Did you know?
Your baby starts hearing as early as 16 weeks into pregnancy. Studies have demonstrated that the fetus can respond to sounds at 19 weeks.

She can’t see the world for another 20 weeks, but she already senses the hustle-bustle. But hearing does not necessarily mean listening.

It’s hard to tell what the fetus perceives exactly in this early stage of development. It’s like imagining how a rose would smell by listening to your friend’s description of it.

We can only guess based on the physics of the environment and the studies on fetal response to sound.

Here’s what we know. The womb is an aquatic environment. The next time you go swimming, notice how things sound different underwater.

So the sounds of the outside world go through a natural low pass filter.

Did you know?
How does a low pass filter change things? Imagine you were listening to a Guns N’ Roses song. Your baby would definitely hear the drums and the bass guitar. But that epic riff from Slash on the leads, not so much.

Moreover, since the treble is more attenuated and less often heard, the neural pathways for perceiving treble develop later.

Let’s listen to some audio clips to get a better sense of the difference the womb makes. Here’s a clip of a popular song and how it would sound to you normally:

Here’s what it sounds like after the low pass filter effect of the womb:

So this is what you would actually hear in the womb (note the whoosh of the fluids):

Did you know?
The womb is a pretty noisy place. There are sounds of blood running through the vessels and the movement of the stomach and intestines. The sounds can reach a level of about 90 dB (sound of a lawnmower).

Another example with the famous song from “Queen”

What your baby actually hears in the womb:

Can baby hear mom’s voice in the womb?

In stark contrast to external sounds, the baby in the womb can hear the mother’s sounds almost unchanged.

To get a sense of how it sounds, plug your ears. Now, say something. Notice how you can hear your own voice almost unchanged.

That’s how the mother’s voice sounds to the baby in the womb.

Albeit with a difference that the listening sensitivity for the bass is still higher because the bass is heard the most. Hence, treble is heard but not perceived as much.

So, like most other aspects, the mother has the biggest influence over the baby’s auditory world.

Luckily for fathers, the bass is heard in the womb, so your baritone will make it. Remember that it is a noisy world there, so go close and be loud. Let your baby know that you are there for her too.

The moment of birth changes everything. It’s as if a dark thunderstorm raging for months turned into a dry, sunny day in a moment. It’s bright and very, very quiet!

Also, the low pass filter is out.

Neurons that process the upper registers jump into action.

Did you know?
Within 7 months after birth, an infant can perceive sound across all pitches.

Rhythms and pitches: What does my baby hear in the womb?

Pitch is only a part of sound and musical perception. Rhythm has an equally important role.

In the womb, there are several rhythms for your baby. The mother’s heartbeat, breathing, and speech, there’s a complete repertoire of rhythms in the womb. The heartbeat, in particular, is like an ever-present metronome.

In addition, a baby can feel the mother’s emotions too.

So when a mother is anxious, her heartbeat increases. She also releases hormones that are passed on to the fetus. The baby receives these together and can sense the mom’s emotion.

A correlation between lower heartbeat and calmer moods has also been made.

Rhythms that can calm or excite a baby

So after birth, music with a BPM (Beats per minute) lower than the mother’s heartbeat has a calming effect on babies.

Likewise, music with a BPM higher than the mother’s heartbeat is perceived to be exciting.

Did you know?
Apart from being critical for music, perception of rhythm plays a vital role in language development. Even if your baby can’t understand you at birth, it is already trained to recognize the phonetic patterns in your language.

How to encourage music in babies

Birth to 4 months: Beyond White noise

Here’s the notes’ repertoire I used for my children (in my voice).

Babies spend the majority of their time sleeping in the first few months. Audio perception is relatively alive, even during sleep, unlike many other senses.

Sleep playlists for your baby

Here is a list of songs that I used for my little ones. (Note: Classical pieces have many renditions. Listen to the whole music before playing it, lest you wake your little angel).

Songs for transitioning into sleep:

Songs to play during sleep: