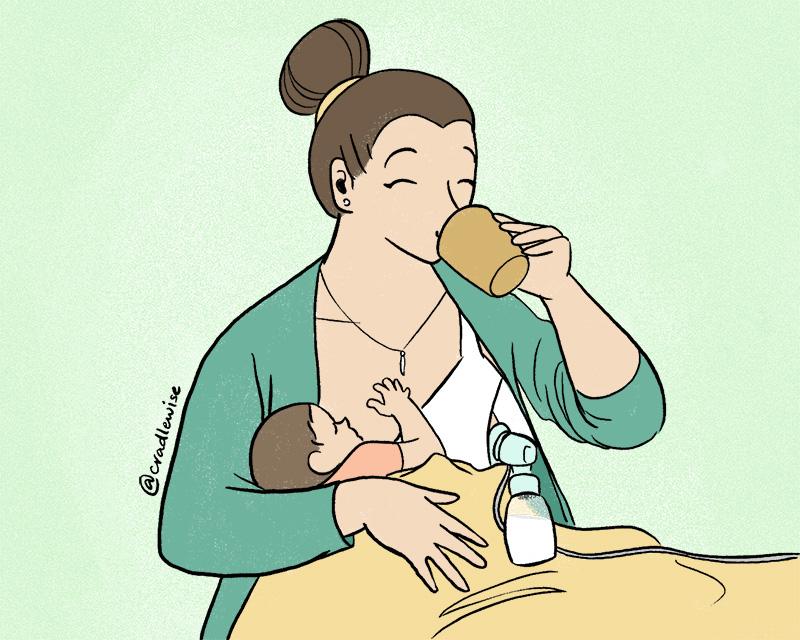 Breastfeeding your baby for the first time can be one of the most memorable moments of your life. But as a parent-to-be, you might be feeling inundated by all of the advice, opinions, and tips that seem to be coming at you.

With everyone giving you their two cents on breastfeeding and nursing, it’s important to separate facts from myths and misconceptions. Here are the top 10 myths about breastfeeding debunked by science.

FACT: If you are nursing for the first time, it’s only natural to wonder, “does breastfeeding hurt?” It really shouldn’t. “It may be uncomfortable as it’s a new sensation, but it shouldn’t be painful. Pain is a sign that the latch isn’t good,” says Krystyn Parks (MS, RD, IBCLC) and the founder of Feeding Made Easy.

I have raised four children, and I performed these experiments, but even I couldn’t foresee the key results of this study until the statistical data came up.

While it’s common for your nipples to feel sore initially because of hormone level changes or an initial shallow latch, this shouldn’t persist beyond the early days.

If you continue feeling pain while breastfeeding, consult a lactation professional, and consider learning about breastfeeding before your baby arrives.

“Take a course or make a prenatal appointment with a lactation consultant to learn the basics of your breasts and nipples,” says Taylor Bonacolta, an RN and Certified Lactation Counselor and the creator of June and Lily. “Going into breastfeeding with basic knowledge helps you become more successful.”

FACT:  Whether you wake a baby to eat depends on factors like the baby’s age, weight, and health. It’s not advised for newborn babies to go more than about four hours without feeding, even overnight. But as babies regain their birth weight and start sleeping through the night, you may not need to wake them if they’re growing well—always consult your pediatrician for specifics.

FACT: Be honest—you’ve probably wondered, “Does breastfeeding make your boobs sag?” But you can’t pin sagging on nursing alone.

Breastfeeding in and of itself doesn’t cause the breasts to sag; instead, the ligaments which support the breasts stretch during pregnancy as the breasts get heavier. Factors such as genetics, gravity, age, lack of supportive bras during exercise, and weight gain may play a role.

MYTH 4: When it comes to alcohol and breastfeeding, you need to pump and dump after every drink.

FACT: When talking about alcohol and breastfeeding, CDC states, “Not drinking alcohol is the safest option for breastfeeding mothers. However, moderate alcohol consumption (up to one drink per day) is not known to be harmful to the infant, especially if the mother waits at least 2 hours after a single drink before nursing.”

Alcohol levels are usually highest in breast milk 30 to 60 minutes after a drink is consumed and can be detected in breast milk for about two to three hours per drink afterwards. If you’ve had a drink, it’s recommended to wait at least three hours before nursing.

MYTH 5 : You can’t get pregnant while breastfeeding.

FACT: Maybe you heard that breastfeeding equals birth control. But can you get pregnant while breastfeeding? You certainly can. Breastfeeding creates higher levels of oxytocin and prolactin, the hormones responsible for milk production. Although these hormones might stop ovulation temporarily, it’s not guaranteed. You could be ovulating at any point and get pregnant—even if you haven’t gotten your period.

FACT: In recent times, a common question has been, “Can I breastfeed if I have COVID?” Whether you have COVID or another illness like the flu or the common cold, it’s fine to nurse if you’re sick. “It’s actually beneficial for a breastfeeding mother to nurse or pump breast milk. If you’re sick, your body will create antibodies to help prevent your baby from getting sick or reduce their symptoms,” says Bonacolta.

A recently published study found evidence of COVID antibodies in the breast milk of vaccinated mothers.

FACT: Sleep deprivation is real, so it’s natural to wonder whether you can have caffeine while breastfeeding. Luckily, you can hang onto your Keurig.

If you drink caffeine, labor doula and lactation counselor Robin Elise Weiss, Ph.D., MPH suggests, “Start with small amounts and watch the baby for potential symptoms [like fussiness].” The CDC states that caffeine passes in small amounts through breast milk but usually does not adversely affect the infant when the mother consumes low to moderate amounts (about 300 milligrams or less per day, which is about two to three cups of coffee).

Did you know?
The amount of caffeine also depends on the type of coffee you’re consuming. For example, one ounce of espresso (the amount in one shot) has 63 mg of caffeine. On the other hand, regular coffee has 12 to 16 mg of caffeine in one ounce.

Countless other factors like the brand, type of beans, and preparation method also contribute to varying levels of caffeine in your coffee.

MYTH 8: You can’t get a tattoo while breastfeeding.

And, of course, anyone planning to get a tattoo should research their shop to ensure they’re following local and state health regulations for best hygiene practices.

FACT: That’s actually false. Breastfed babies often get hungrier sooner than the babies that are formula fed because breast milk is easier to digest. They will also nurse more during growth spurts.

MYTH 10: Only those who have experienced pregnancy can breastfeed.

FACT: Believe it or not, you can produce milk without being pregnant, and through induced lactation, breastfeeding (or chestfeeding) is available to parents who did not biologically give birth to the baby—like adoptive parents, intended parents through surrogacy, and trans parents.

The steps required include:

With induced lactation, milk is often produced very slowly, so the process must be started weeks or even months before the baby’s arrival. Breastfeeding or chestfeeding can also be simulated using a nursing supplementer. In this process, a bag or bottle will hold milk or formula and carry it to the nipple through a tiny tube.

Did you know?
It’s not necessary to have ovaries and a uterus or even be fertile to be able to breastfeed. A person needs a hormone called prolactin for milk production and oxytocin for milk ejection. The pituitary gland is responsible for releasing both hormones.

Breastfeeding is a long journey, and it’s essential to have support and reliable information during this time. Here are some evidence-based sources for breastfeeding that might be helpful:

Apart from such resources, “Having a professional to support you on your journey is [also] great,” Weiss suggests.

Besides your own LC and pediatrician, it can also be helpful to connect with other breastfeeding parents to swap tips. Depending on where you live, you might find one at your pediatrician’s office, hospital, or yoga studio. La Leche League also hosts chapter meetings that include a mix of new and experienced parents.

“Remember that there are so many ways to breastfeed—do not think there is only one way. Do what works for you and your family and get help to meet your personal goals.”